WWE set up shop in San Jose, CA, Sunday night for Payback, the first Raw-branded major show since WrestleMania. The build up to this event was lackluster, to say the least, and I really didn’t expect the show to be much better. However, for the first time since the brand split, the Raw creative staff pleasantly surprised me. This was a great show, with one big exception, so let’s dive in:

This was a solid match. Both teams are solid workers with styles that mesh very well. Enzo and Cass go over on a quick roll up by Amore. Both teams have the ability to be in the title hunt, but I have a feeling we will see this match a few more times in the next couple months before either team elevates to the main event picture.

The Miz is one of the best heels in WWE today, and Finn Balor is way over, especially with the smarks. Finn uses his time on Miz TV to announce his intentions to chase down Brock Lesnar for the Universal Title (perhaps not the best idea for a performer that seems to struggle to stay healthy against smaller guys). It was just a couple weeks ago that we saw Bray calling out Balor’s demon, so perhaps this will set the stage for a Triple Threat at SummerSlam that allows them to put that belt on a full-time wrestler without making Brock look weak.During the interview, Finn mentions Balor Club, Miz asks if he can be in Balor Club, Finn asks the fans, everyone says no, and Miz starts jawing at Finn. Finn says he’s going to leave because he doesn’t want this episode of Miz TV to end like all the others: with Miz getting his ass kicked. Miz continues to jaw at Finn, and Finn hits him with a Slingblade and a missile drop kick which kind of calls attention to the fact that Finn Balor isn’t really big enough to kick anyone’s ass, he can just outwrestle them.

The main card started off with a rematch from WrestleMania that pitted former best friends Kevin Owens vs Chris Jericho to see which Canadian would hold the US title. Everyone knows that Jericho’s band, Fozzy, has a concert tour coming up soon, so the smart money was on Owens to retain in what we all hoped would be a better rendition of their WrestleMania affair. The match turned out to be a really good match with great story telling and very solid wrestling. Jericho ended up surprising me with a submission win in the Walls of Jericho. The win gives Chris the US belt and sends him to SmackDown. 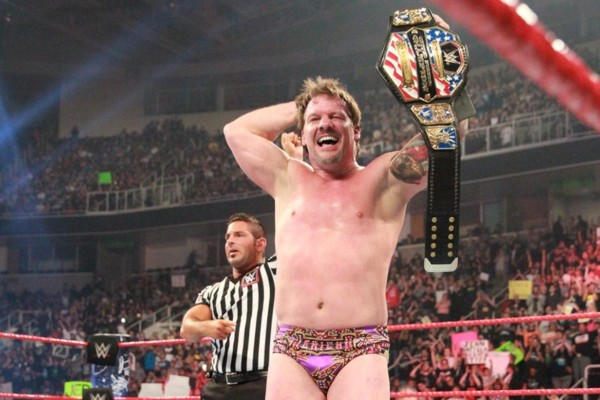 The commentators made a point of saying that the loser would stay on Raw, but then Renee Young mentioned on Raw Talk that KO would be on SmackDown Tuesday night, so we will have to see how that goes. Jericho has to drop the title soon; the question is simply to whom. I imagine Owens gets his contractually obligated rematch on Tuesday night and ends the feud with a title win there.

This is another WrestleMania rematch, but I could watch these two a million times. Here we have two of the best workers and story tellers in the company paired atop a division that still has a long way to go to build up its other talents. Aries and Neville was a superb match, possibly the best on the card, and these two really let loose in a way that they didn’t on the WrestleMania Kickoff show. In the end, Aries locked in the Last Chancery on Neville who seemed on the verge of tapping. Then Neville reached out and grabbed the referee, pulling him into the pair and breaking up the hold. The referee promptly disqualified Neville, giving the win to A-Double but leaving the belt around Neville’s waste. This was a perfect ending to this match, handing a win to Aries and leaving the feud with plenty of fuel for the next month or two.

In another match that impressed me greatly, the Hardys and Sheasaro faced off in a match that was replete with high flying and feats of strength mixed in with good mat wrestling along the way. These teams told a good story and proved that Sheasaro belonged in this match as much as either of the two teams they beat to get here (Enzo/Cass and Anderson/Gallows). The end came when Jeff Hardy made a blind tag as Matt was about to be slammed by Sheamus. As Sheamus attempted to get the pin, Jeff landed a Swanton Bomb on both men and pinned Sheamus to retain the belts.

After the match, the teams shook hands and went their separate ways until Sheasaro rushed back to the ring and laid a vicious beat down on both Hardy brothers, leaving Matt with a vicious cut to his head. The heel turn was fantastic, if predictable, and amazingly vicious for the notoriously PG company. Another note: Matt seems to keep hinting at the Broken gimmick, once even yelling “Delete” while making his slashing motion. I am not sure if this is indicative of a return to that gimmick soon or if this is just Matt having a hard time letting go, but that’s an interesting side plot to watch as the rest of this feud plays out.

Bayley entered the ring in her hometown to an electrifying pop. Despite an inability to cut a decent promo and a lack of any edge to her character, Bayley has gotten over more than any other woman on either roster. 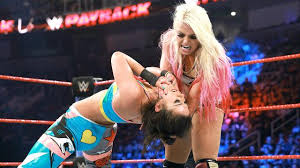 Bliss, meanwhile, has really developed into the second best all-around performer (behind Charlotte) on the women’s roster. Her mic skills are really excellent, and she has developed into a solid worker with a great character. One thing both women lacked coming into this is a decent finisher. That shortcoming seemed put to rest when Bayley used the flying elbow for the second major show in a row. Bliss kicked out and, moments later, landed one of the best DDTs I have ever seen by someone not named Jake Roberts. Bliss goes over clean to become the first woman to win both the Raw and SmackDown belts since the split.

This match really sucked, and the first half sucked the most, so I won’t waste much time on this. Randy Orton shows up to the House of Horrors in a limo…wearing jeans and no shirt. And that may be the part that made the most sense. Bray was waiting inside this house, where the only horror seemed to be the sinkful of dirty dishes, and the two fought, with Bray eventually dumping a refrigerator over on top of Randy and leaving in Orton’s limo to head for the arena where we had already been told the match must finish. This segment was overproduced and looked more like a scene out of a Lucha Underground episode. Also, there was nothing slightly creepy about most of the house other than it needed to be cleaned up a bit. One room did have some semi-creepy dolls hanging from the ceiling, but this was a very poor use of the Eater of Worlds gimmick.

This was another great feat of storytelling that included solid ring work and a good ending. Rollins sold his knee injury throughout the match, and Joe looked physically dominant with Seth coming off as the scrappy little fighter who never quits. This was exemplified in the ending when Joe locked on the Coquina Clutch. Seth managed to avoid quitting long enough to roll Joe over and get a pin while Joe still had the submission locked on. This was an excellent ending that left Rollins with a victory but didn’t make Joe weak at all. I expect we will see a few more installments of this feud before it is blown off.

Bray pulled up to the arena in the limo, amazingly, just as the previous match ended. He made his way to the ring in the dark with the fans all holding up “fireflies.” When the lights came on, however, there was Orton behind Wyatt, and a brawl ensued. This portion of the match was mercifully short, and the match looked over when Orton landed an RKO. Then, from behind comes Jinder Mahal and his Bollywood Boys (I’m hoping these three come to the ring in blue latex and feathers on Tuesday). They attacked Orton and beat him down, eventually leaving him to the Sister Abigail of Bray Wyatt. Wyatt got the win, but Jinder Mahal is the only one who got any boost from this train wreck.

The main event showdown between Roman and Braun held a lot of promise, but fans have learned not to expect much of the WWE when it comes to Reigns. This time, though, we were wrong. Roman came out wrapped up from his beating several weeks prior, and he sold those injuries all night. He rallied several times, hitting multiple superman punches and spears, but every time it looked as if Roman might be able to win, 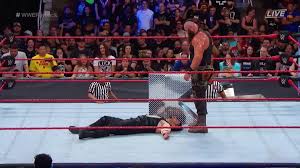 Strowman reasserted his dominance, eventually pinning Roman clean in the middle of the ring before beating him viciously again. Braun was finally persuaded to leave the ring with Roman laying in the center, blood pouring from his mouth. As Roman was being loaded into the ambulance, Braun rushes in to do more damage, but Reigns moves at the last second and Strowman runs straight through the ambulance door, sending it flying off its hinges. When Braun tries to attack again, Roman slams the other door on him, leaving the big man stumbling away.

As I said to start this off, I wasn’t expecting much, but I was pleasantly surprised. Raw managed to put on a mostly excellent show (other than the House of Horrors debacle) and set up some good story lines going forward. It’s almost enough to make me think maybe they got SmackDown’s writers in the shake-up.