I met a coworker of a friend last week at a Happy Hour, it just so happened that it came out after talking about Guardians of the Galaxy 2 that he was a wrestling fan. Not just a WWE fan, but a WRESTLING fan. He watched the E, Indies, New Japan, quite a bit, I was impressed and he was shocked to fun into another wrestling fan in Hipster LA of all places. Then he asked me a very direct question after recounting how Pro Wrestling Guerrilla got me back into watching after the end of the Attitude Era, “Do you think the Young Bucks are good for wrestling?”. I was kind of taken back because my first reaction was to say, “Sure, why not?”. But it was surprising to me that a guy who was such a fan of Indy and Puro would even ask a question like that from a team that basically owns those scenes.

Someone once told me that “wrestling shouldn’t be a binary experience”, in such that there shouldn’t have to be a match that has high spots without the psychology and vice versa. I agree, and it occurred to me that asking about the ‘Bucks was a way of this guy also saying that he recognizes that the notion of psychology and realism playing as big of a part in the way certain fans enjoy a match as much as the entertainment value of displays of athleticism. In short, the middle of the Venn Diagram of wrestling fandom is growing. I personally love all sorts of wrestling; it’s never been as much about the “style” as the performer for me. As much as I enjoy the “near falls” and “crazy finishes” it’s just as much about the logical progression of a match. A finisher used to actually FINISH a guy off…like Sunny backstage during a RAW is WAR taping. Bookers used to protect a guy’s finisher, that’s gone away. While in some cases it makes sense to allow for a kick out, that’s what I would expect out of a well written feud, but that needs to be the exception, not the rule. 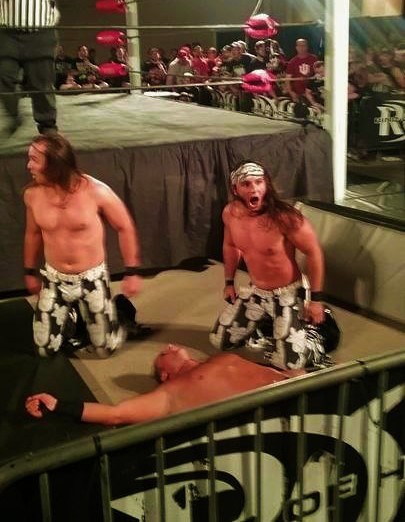 I don’t think that a “Super Kick Party” is in the original spirit of wrestling. When the ‘Buck, or Ospreay, or anyone else No Sells what should be devastating moves, and rebound to dish out punishment of their own, only to be No Sold, it does expose the sports. To me, a kick isn’t “Super” if I have to use 20 of them to knock a guy out. It’s like calling a straight jab a “haymaker” in boxing when you hit your opponent with it 50 times during the night. What some of these companies have done is basically said, “We are ENTERTAINMENT, we are THEATER”, and that’s not to say that Vince and Co. haven’t done the same because they now have entertainment in the name of the company. What hurts the argument of the ‘Bucks being “good for wrestling” is the lack of psychology at times and the fact that in order to enjoy their matches you don’t just suspend your belief; you have to completely expel it. If you’re willing to do so for the sake of entertainment, then that’s fine.

I’d argue that Kayfabe died the minute Twitter and the Facebook gained prominance and you got a full look behind the curtain of these performer’s lives. Wrestling was more popular at a time when it only had boring old boxing to compete with in the arena of “combat sports”. It took MMA to make wrestling realize that they needed to adapt because they couldn’t exactly push their guys as “legit tough guys” when there was a wildly more popular sport that HAD legit tough guys fighting it out without a predetermined outcome. If you want to know what killed good old fashioned NWA/AWA/WWWF/Jim Crockett style of wrestling, it was Mixed Martial Arts.

There are some people who say the ‘Bucks would never make it in the “E” and that’s possible, other teams that were popular in NXT failed to catch on like the Vaudevillains, The Ascension, and even American Alpha haven’t lit the world a blaze. But looking at the size of the ‘Bucks they aren’t that much smaller, if at all, than Gargano and Ciampa. The E saw fit to sign the Bollywood Boys as well, and Breezango aren’t any less flamboyant than the Jackson Bros. There was also a time when the Hardy Boyz were rocking the flowered tights and head bands before anyone thought they’d amount to anything. Wrestlers can evolve, the question is whether they even should? Why mess with success?

I believe the E is already morphing some of the styles of CW’s and HW’s to some degree. Jack Gallagher, TJ Perkins, and Noam Dar all have aspects of sound technical mat wrestling in their arsenal. Roman Reigns, Braun Strowman, and Kevin Steen are getting to #DIVE and take to the top rope more often. I could do with a little less aerial arsenal from big men unless they are coordinated and athletic enough to do so. Every time I see Moose try a moonsault it makes me harken back to the Vadersault that seemed just as likely to break his opponents neck as his own. Brian Cage is a beast, but he needs to add a moonsault to his moveset about as much as AJ Styles needs to crimp his “bob”. Not every big man that can successfully land a high spot SHOULD try to land a high spot, because an awkward Swanton is just awkward. That also goes with smaller wrestlers like Ospreay, Ricochet, and Rich Swann, not every move needs a full spin or flip to be effective. A 450 hammerlock isn’t going to cause an opponent to tap out any more than a regular one. Does it look cool? Sure, but what’s the psychology in that?

I would argue that we need more separation between the move-sets of heavyweights and lightweights/Juniors. The stark contrast in styles just helps to highlight those divisions. Once you muddy the waters and everyone wrestlers the same then what’s the point of watching different products? The more companies differentiate themselves from each other the better off we’ll all be as wrestling consumers. Its’ the principle of the free market system, those that succeed thrive and those that do not are forced to either adapt, innovate, or fail. Some argue that the flips and spots are just a cheap trick to get smaller wrestlers over, and to some degree I agree. But when you’re in a company with 350 lbs guys, you can’t expect that you can be taken seriously using the same moves. You need both the “sweet” and “salty” of the classic mat wrestling and “high spots” to have a well-rounded fed. That by no means is saying that good storytelling and ring psychology should ever be thrown by the wayside, but provided you can tell a good story, there’s room for everyone.

Don’t tell Jim Cornette I said this, but anyone who is still clinging to the past and feels like they need to consistently denigrate the fans the performers that are doing what they love and are passionate about, comes off as a wee bit bitter. Like an old man yelling at “Alexa” for being an undocumented worker. Don’t get me wrong, Corny has done some great work in the past, but…if he doesn’t want the business to pass him by, he’s going to need to learn how to “book” in the new world. I’d love to see him take that old-school sensibility and bring it an Indy fed that could use the direction. Wait…that sounds awfully familiar….

To me, wrestling is like music. It’s hard to have an argument as to what the best kind of music is. You might be able to argue about what the best singer or band is WITHIN a genre of music, but you can’t very well win an argument with a country music fan if you’re into Hip Hop. That’s sort of what this debate is about. The Youngbucks are basically EDM, maybe Dub Step. There are your purists and old school wrestling fans who are just into Skynyrd and Neil Young, you’ve got your fans of J-Pop, or Rap, it’s a personal preference, how can you be wrong? Can you say that in certain places a genre of music just doesn’t fit? Sure. Do I want to drink an Old Fashioned at a trendy speakeasy while Major Lazer or Skrillex is blasting from the speakers overhead? About as much as I want to be at my gym in a “Metabolic Meltdown” class while they pump Bob Dylan and the Traveling Wilburys. It’s all about knowing the audience. There is differently a niche’ for the ‘Bucks to thrive, and if they aren’t your cup of Mountain Dew Code Red then don’t watch them. if anything, shouldn’t just knowing the ‘Bucks exist make you appreciate you’re your grounded mat technicians even more?