Last weekend, I had a very rare opportunity fall into my lap when a buddy of mine just happened to have an extra ticket to the last night of the New Japan Pro Wrestling G1 USA Special. The show was held in the back basement section of the Long Beach convention center, and was packed with rabid wrestling fans, of which about 70% were wearing various Bullet Club t-shirts. Although nary a “Hangman” Page or Chase Owens shirt…interesting…actually it wasn’t. It was reported that around 2,300 to 2,400 tickets were sold for each of the 2 nights depending on the source. Tickets ranged from $150 for front row seats where you might have the pleasure of being pasted by one of 189 dives throughout the event, or $30 for back row seats, where you’d be better off standing since without stadium seating you couldn’t see anything happening on the mat past the first 5 rows or so.

The shows aired live through NJPW’s internet streaming site and had an option for English commentary. Although I believe there was a tape delay on the first night. NJPW announced that due to the big success of the event they will be touring the US in the spring of 2019. They are also planning to open an office in Los Angeles by the end of the year and open a “Dojo” for trainees at the beginning of 2018. So this is all GREAT news, right?? Well before we start placing orders for our NJPW Wrasslin’ Buddies and buying tickets for “The Marine 6: Strong Style”, we should consider the enormity of what NJPW is taking on and what their chance of success is based to n previous models. 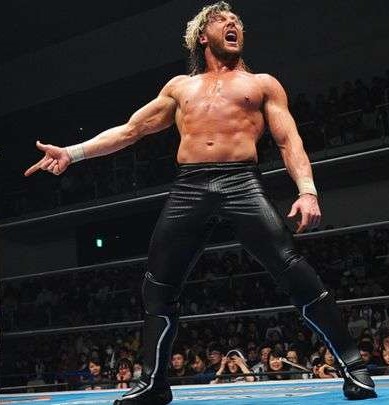 Let’s start with the tour; there have been a handful of companies other than the E that have tried to tour, and with varying degrees of success. ECW managed to tour the pretty successfully around the East Coast, and depending on whether you were a fan of XPW back then, they managed to draw a decent number in their LA debut. RoH has done a few tours, although they tend to stay to the East coast and Midwest, with an occasional stop in Vegas. I actually attended their first “West Coast” tour many years ago and the Vegas tour drew people from all over California as well. TNA/IMPACT/GFW/Owl Pro Wrestling also tours and does house shows, although not as extensively as I’m sure they’d like to. Having seen one of their shows in SoCal I can tell you that the sheer size of the production and cost alone makes it almost unprofitable if you don’t sell out the venue. A very good comparison would be Dragon Gate.

In 2008 Dragon Gate Pro Wrestling ran their first ever US show in a suburb of Los Angeles, ‘Friday LA Extreme Night”. Attendance numbers vary between 500 and 600 paid attendees, but it was considered “successful” for the small company. On the legs of that show they announced additional shows in Hawaii and Philadelphia. They also set up offices in Philadelphia and Houston and opened up the Dragon Gate USA promotion. They managed to pull off a few tours a year and they had several partnerships with other Indy feds like Evolve, Chikara, Full Impact Pro, and Hybrid Wrestling. Unfortunately…they ended up going on a hiatus because they lacked enough of the Japanese Dragon Gate talent that was supposed to be the cornerstone of the company. Sure it was great to have names like Bryan Danielson, Chris Hero, Austin Aries, Drew Galloway, Johnny Gargano, Ricochet, and Jon Moxley on the roster, but ultimately you can’t be a Dragon Gate subsidiary without actual Dragon Gate wrestlers.

This is something NJPW is going to have to consider. It’s likely they will set up talent exchanges and working agreements with new Indy feds, as well as continue their working relationships with companies like RoH, PWG, and CMLL. It’s only speculation as to how many shows NJPW may run in the US, but if it’s a monthly or every other month schedule they will need to make sure they can secure enough Japanese talent to mix in with local and domestic talent. This might be asking a lot of their wrestlers who aren’t used to the kind of travel and grind that wrestlers like the Youngbucks, Ricochet, and Zack Sabre Jr have had to live with. On top of that is the issue of which venues they can book.

Ultimately it turned out that NJPW could have easily sold another few hundred tickets without any more effort than securing the seats from the LBCC. I’m not sure whether the venue would have even allowed that many people in at one time. I could have easily seen 3,000 to even 4,000 people attending each day had they moved to a larger venue. Some fans are saying they could go even higher, perhaps a near sell out of the Staples Center or Honda Center. I’m rather skeptical of that number. Even the WWE “PPVs” don’t sell out in those venues consistently. If you’re talking house shows or TV tapings, they can vary between as little as 2,000 to as many as 11,000 if it’s leading up to or out of a big PPV. NXT Live shows are selling anywhere from a few hundred to a few thousand tickets if they are lucky and they have the WWE hype machine behind them. If NJPW doesn’t think it can sell that many tickets, and smart money is on incremental growth, then you’re looking at college arenas and gyms that can hold between 2,000 – 6,000 people in venues not made for what should be a cozy confine of the wrestling ring. No need to start big, not sell out and then lose money on a larger venue.

Finding offices in LA won’t be difficult, finding another space for a Dojo will be a little tricky, but doable. Considering their last (Inoki) Dojo was a small gym in a open air warehouse in Santa Monica, I would think they’d be looking for a larger facility. Likely they will not be able to afford that in Santa Monica again, for reference in the same block a 2 bedroom apartment that’s 1,340 sqft, in an older building costs $3,450 a month to rent. There are some other areas that are considerably cheaper. Having a west coast office in LA will make it easier to bring in talent from a logistics point of view, it also means that PWG could be a very important partner to NJPW. Rocky Romero will be the head trainer and it is likely that smaller feds will also feed talent into the Dojo with hopes of eventually getting a shot to go to Japan, PCW, NWA, and Championship Wrestling from Hollywood. Dragon Gate’s Toryumon gym in Mexico and NXT are great example of how this system works for those not familiar with the old NJ Dojo. I actually got to watch shows that featured Fergal Devitt (Finn Balor), “Machine Gun” Karl Anderson, TJ Perkins, Cheerleader Melissa, Shockwave the Robot (Yes…it was a wrestling robot) and Awesome Kong at the old Dojo. Unfortunately the crowds became smaller and smaller as other feds were booking the more recognizable local talent and finally the Dojo faded away without so much as a whimper, but with the resurgence of NJPW that shouldn’t be an issue. 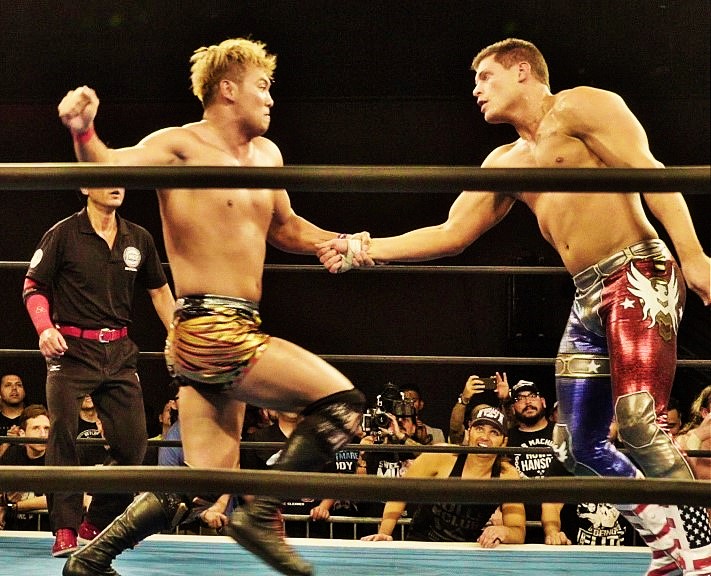 The thing that feels the trickiest here is how do you handle the broadcasting? While streaming on their own website or AXS TV has worked in the past, there is a question as to whether they would pursue other avenues. Perhaps Flo Slam or a Youtube channel…wait..oh yeah, maybe put that Youtube idea on hold. But ultimately the real prize would be to have a nationally TV deal. Something that GFW has managed to secure and even ECW for a short time. that may be a bit more difficult because a majority of the roster may not be fluent enough in English to connect with some fans and subtitles don’t work on live shows, it would require a delay. The reason that Lucha Underground translates on television is that they feature a majority of English speaking wrestlers and lucha has never been about promos as it has been for the US. My gut tells me that subtitles won’t fly with most casual fans. Reading is for suckers!

While it would be interesting to see whether a company like STARDOM would ride the coattails of NJPW once they get established in the states, I’m more than happy to keep women’s wrestling off NJPW. One thing I enjoy about NJPW is that with very little exception they don’t feature women, romantic relationships, and sex in their booking and angles. It’s about the competition and not the soap opera drama. I think we are looking at a similar deal with Netflix that LU has, or perhaps Hulu, or even Amazon. While a weekly TV deal would be ideal, it would have to require more extensive travel and shows than perhaps NJPW USA could initially handle, they may consider supplementing it with Japanese content as well, but it would be a tricky proposition. A live tv show is likely out the window, but multiple takings and episodic filming could be possible. TNA, RoH, even WSX pulled off that model. The idea is to eventually work on a TV deal after proving they can draw downloads on a consistent basis for a year.

All of this leads me to believe that NJPW could easily find a home in LA again, training the next generation while putting on smaller shows bolstered by West Coast Indy Feds would help, it would also potentially rival Full Sail and Florida as the place all prospective wrestlers want to move to if they want a shot at Japan. A company like PWG would be foolish not to help the new NJ Dojo succeed through talent sharing. Venues can be found at local colleges that could accommodate quarterly or even monthly shows, but you want to consider a touring rotation where you don’t burn out your crowds. Maybe each major market gets 2 shows a year: SoCal, Northeast (NY/Phil), Midwest, Florida coastal, and I’d argue Seattle, which has a huge Japanese population and ties as well as almost no other competing companies to speak of. TV will come eventually if word of mouth spreads and a Hulu/Netflix deal is successful, but that’s the kind of thing you don’t want to rush. After all, that’s what took ECW down and almost TNA, well technically it kinda did. I think New Japan has grown to the point where they could be the #2 company in the states in a few years, but patience. NJ needs to walk before it can run. Just think, maybe we’ll be seeing Los Ingobernables de Japon t-shirts at Claire’s by the winter??