There are not a lot of things you can do to get yourself “Blacklisted” in professional wrestling. Drug use, domestic violence, no-showing, egos, throwing a company’s title in the trash. There are precious few things you can do that are so heinous that some company somewhere won’t welcome you with open arms. Especially if you’ve ever tasted success or notoriety. The bigger the name, the bigger transgression you can commit and still be forgiven. There is, however, one transgression which can result in a near or actual “Blacklisting”, that’s going full on “shoot” and injuring another wrestler on purpose.

Now accidents and injuries in the ring happen all the time. there are even some wrestlers who have received a reputation, deserved or not, for injuring their opponents, Ultimate Warrior, RVD, and Mr. Kennedy, Goldberg (just ask Bret Hart) have been painted with this brush and most recently Seth Rollins. Now we aren’t talking New Jack levels of recklessness or malice when he purposely tries to injure an opponent to look “hard”, but just general sloppiness. But what happened at Triplemania is different. There are 3 sides to this story and unfortunately the side that counts, the truth, will probably never be uncovered.

Sexy Star retired last year, then suddenly unretired a few months ago, winning the vacant Women’s Title after Taya was mysteriously stripped of it. Going into AAA there were a lot of questions swirling around as to why she had a sudden change of heart and whether she orchestrated the title vacancy along with Vampiro. When she legitimately busted open Lady Shani in the triple threat, then decided to “go into business for herself” by injuring Rosemary with a cross-arm breaker, people were stunned. While Sexy Star was known as being the ultimate “Diva” backstage, she had never exhibited such disregard for her wrestlers before. Burying a fellow wrestler backstage or through “the book” is one thing, deliberately injuring another wrestler is something different all together.

I think Joey Ryan said it best when he posted, “”we constantly put our health in each others hands. If you violate that trust, you’re not one of us”. The trust that wrestlers have in each other to keep them safe is what allows for the kind of exciting, impactful, realistic, and “high risk” action you see in the ring. If wrestlers weren’t trusting enough to put their well being in the hands of their opponents then wrestling matches would be nothing but headlocks and knife edge chops. If it’s true that Sexy Star purposely decided to “shoot” on her opponents to make herself look better at the expense of their health then there’s reason to put her on a “temporary blacklist”. Quite frankly as a promoter you are sending a bad message to the rest of your workers if you invite her in, you’re saying that attitudes and egos don’t matter and you don’t care about their safety if you can get a “star” at a relative discount and sell a few more tickets. Because that’s EXACTLY what’s going to happen. The next show she works will see a drastic bump in ticket sales because of the “spectacle factor”. The pull of that might just be TOO great for some Indy promotion out there.

I wonder how this is going to affect her booking outside of AAA. I’d assume that since AAA and Vampiro are kind of oddities in themselves when it comes to booking that she may not be severely punished, if at all. If this was the E or any promotion in Japan this would be a huge deal and possible career ender there. While she is a “Star” in some sense, she’s not generally a huge draw, nor is she booked at many places on a regular basis. There are talks that she is even done with Lucha Underground and my guess is she never steps foot in a GFW ring despite the working arrangement the two companies have. If more wrestlers like Joey Ryan and Cody Rhodes come out against her and effectively make promotions chose them or Sexy Star, she could find herself at the mercy of AAA. Especially when you consider that women’s wrestling on intergender shows are generally not the draw in most cases, giving promotions even LESS incentive to spend big (thought likely shrinking) bucks to bring her in, and we’ve already seen a handful of promotions unbook her. 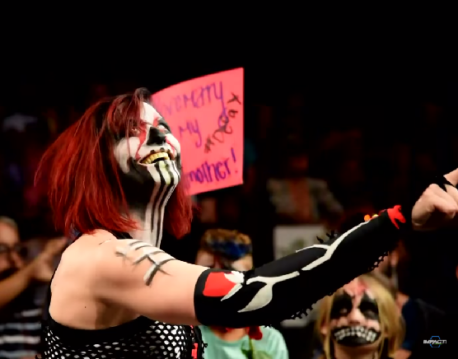 An interesting aspect here is that this is a female wrestler shooting on her opponent, that’s pretty rare. Say what you will about female wrestlers, but they tend to be a fairly close knit fraternity. Or maybe it’s sorority. While there have been several cases of female wrestlers injuring someone in the ring due to either sloppy ringwork or inexperience, I can’t think of another instance where there was a female shoot. You’d have to think that because there is such a dearth of truly “in demand” female wrestlers in the industry that this is going to hurt Sexy Star’s ability to work some Women’s promotions like Shimmer or overseas in Japan. As fans I think we take for granted that when male performers get hurt it’s a part of the job and they are big and tough enough to handle the risks. But in polite society we are taught that violence against women in any form is an atrocity.
With the events of last weekend we are going to soon see just how big a STAR that Sexy Star really is, especially after she reportedly refused to apology to either women and even released a statement where she more or less tried to skirt the blame and even accuse others of having it in for her. While the incidences themselves were awful, the most damning actions from Sexy Star took place after the match. If she had been contrite and apologetic she may have received some measure of forgiveness. We know that an armbar is legitimate submission move in MMA so we may be able to debate the intent, but after her response to her actions it’s almost like the nail in her own career’s coffin. Well at least she has AAA, the question is: Is Sexy Star a big enough Star to for AAA to protect?