In 2002, a young wrestler named Slim J walked into a match at the ninth event ever held in TNA Wrestling’s history. He was involved in a tag team match, siding with Kid Kash and Shark Boy, in a high-flying contest against The S.A.T.s and The Amazing Red.

To this day, Jeremy Boyd is believed to be the youngest person to ever compete on an American pay per view. And over 15 years later, he’s going stronger than ever, competing in Future of Honor matches for ROH. Except now he’s a seasoned veteran, who has continued to make himself a valuable commodity by portraying two very different roles in the industry: Slim J and Gladiator Jeremiah.

“I’ve transformed my body, and really tried to go the extra mile for wrestling” Jeremiah told TheGorillaPosition.com in a recent interview. “Just looking for that opportunity. I was young then, and of course, I shouldn’t have had a contract at that time. But, it was a chance to be on a big stage and see what it was like.”

“I really do have a lot of history in the business, and I’m grateful for having been involved for so long,” Boyd said. “But, I don’t think at the time, I realized just how many talented people there was around me, and that I was getting a chance to learn from them.”

“I was really scratching at the edge for a long time, and I didn’t get a lot of chances early on. I’ve been a lot of places – TNA, Ring of Honor – I’ve just been waiting for that one, big chance.”

Along with his appearances as Gladiator Jeremiah in Ring of Honor, the 32-year-old still appears under his original Slim J persona, and has gained a lot of attention for his freestyle rap skills. In what has become very typical in today’s wrestling world, he finds himself getting booked as almost two, totally different people

“Obviously, it’s very different when I’m Slim J,” he said. “Even as The Gladiator, I perform differently, and I even change it up in the ring. A lot of the moves that I do in the character, are moves I’ve created specifically for The Gladiator.”

As Gladiator Jeremiah, he has plied his trade with Ring of Honor, as well as Anarchy Wrestling and many regional promotions in the south.

It’s when he flips the switch and turns into Slim J, however, that he really raises the roof.

“At first, I don’t think I was very good,” he said. “I just kept working on different things, and sampling beats. I worked on mixes and I just kept getting better. Now, when I get ready to rap in front of the crowd, it just comes naturally.”

The persona, however, was born from a humorous background story.

“When I first got up here, I had gotten into a wreck— joyriding; I wrecked a car doing about 130, and got into a little bit of trouble. Nothing bad. Stupid stuff that you do when you’re younger. But, it knocked me out of wrestling for a little while, until I got back in shape and started acting right again.”

At the time, rapper Eminem had been storming the charts for a couple of years. He was notoriously known by the alter ego, ‘Slim Shady’, for his wild antics and unpredictable behavior. The locker room made an obvious connection.

“I got back,” he laughed. “And, everyone was giving me crap and saying, There’s Slim Shady! Watch out for him!“

“Everybody in wrestling kept calling me ‘Slim Shady’. So, Bill Behrens came to me and said, okay, you’re Slim J now, a white, wannabe rapper.”

At first he wasn’t totally receptive to the idea. In time, he took the role on wholeheartedly, and began improving his rapping skills.

“I finally just ran with it. I went out and got everything I could afford, as far as music equipment. And, I tried to just grow the character. I never pictured myself being a ‘white rapper’, but I just kept building on it and it grew from there.” 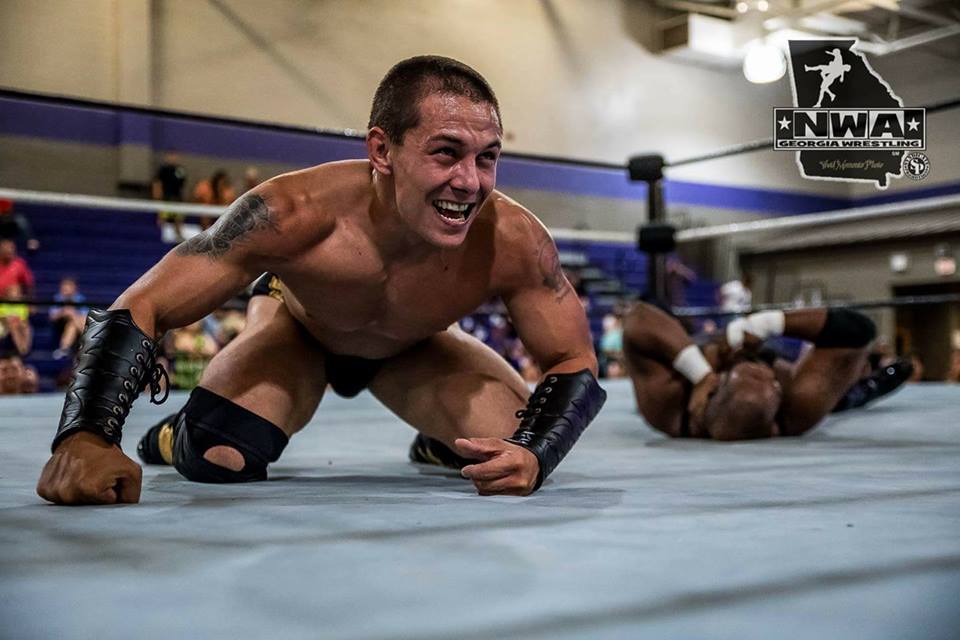 He has now become a master of mixes and a baron of beats, having produced several of his own albums. He even recorded AJ Styles theme music in Ring of Honor, “Demi-Gods”, with his group, Lab Ratz.

“AJ liked the original song, so we kind of took it and sampled it a little and changed it up,” he said. “I took kind of a rock beat and rapped over it. And AJ actually likes rap, so he thought it was pretty cool. And, of course, I was honored that he wanted to use it as his music. And I’ve also recorded music for a lot of other wrestlers over the years.”

Even though recently he has primarily been wrestling as Gladiator Jeremiah… every now and then, Slim J makes a return to rock the stage.

“I have been mostly working the Gladiator gimmick, but it seems like the crowd kind of missed Slim. It might have gotten a little stale for a while, but when I did a reunion show a while back as Slim J, it really got over. The crowd really got into it.”

“So, I guess you can say I do both. I feel like I can show that I can do both Slim J AND The Gladiator. I think I’ve been proving that by just getting better everytime I go out there, no matter what I’m asked to do.”

As he continues to mix power slams with powerful beats, Slim J/Gladiator Jeremiah says that he wants to pursue BOTH of his passions. However, he believes that he’ll continue to produce music, even after wrestling is over.

“If I got to any company, anywhere, I would be willing to do any character they asked me to. But, once I made this commitment, I love it. I’ll be making music and producing beats forever. I like the creativity and the freedom that I get to have, and it just shows one more set of skills that I have.”

“But, I think they can go hand in hand, and I’m looking for any opportunity, in wrestling or music, if it’s out there.”