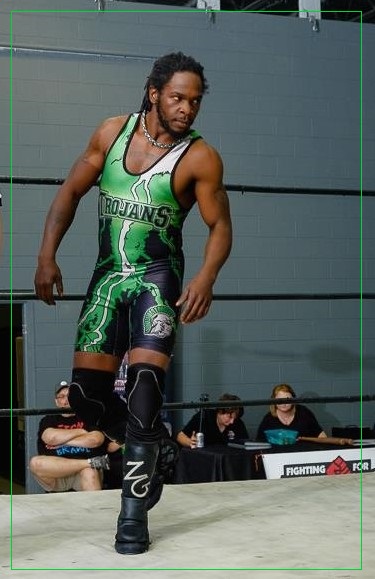 AJ Daniels is determined to let nothing slow him down.

“I’ve been everywhere lately,” Daniels said, in a recent interview with TheGorillaPosition.com, as he was preparing for a busy upcoming schedule that will include stops with Next Generation Wrestling in Tennessee and AIWF Mid-Atlantic. “I’ve been as far west as Colorado. I’ve been down to Florida, Georgia, all through the Carolinas. I’m pretty much all over right now.”

For the six-year veteran, life going from town to town is not only a labor of love, it’s a means to an end.

“I have to travel, because there’s so much talent in North Carolina and all around in this area,” he said. “There’s only so many spots out there, and if you want to get noticed, you got to put in that time.”

“You have to go out there and get it. Nobody just walks into this business and finds success right off the bat. There’s a select few, but it’s very, very rare. So, I wanted to get my name out there, and be seen, by as many people as possible.”

The eyes that have seen the North Carolina native have been witness to aerial excellence. While Daniels may spend a lot of time on the road, he also spends quite a bit in the sky. Nicknamed Zero Gravity, Daniels mixes a high-altitude attack with high-octane explosiveness.

He was intially a standout football player in high school, offered a scholarship in Buffalo, NY, before he got into some minor trouble at home that forced him to re-direct his career. Daniels spent little time at the crossroad, before he took the path of pro wrestling and began training with Mike Shoals of Dirty South Championship Wrestling.

Today, he says that those experiences help make him more determined as he floats through the indy universe.

“I was forced to grow up fast,” he said. “Without getting into too much, let’s just say I was on a wrong path and making mistakes when I was younger. I had to make a lot of changes in my life and look for all the positives that I could, and wrestling for me, was a big part of that.” 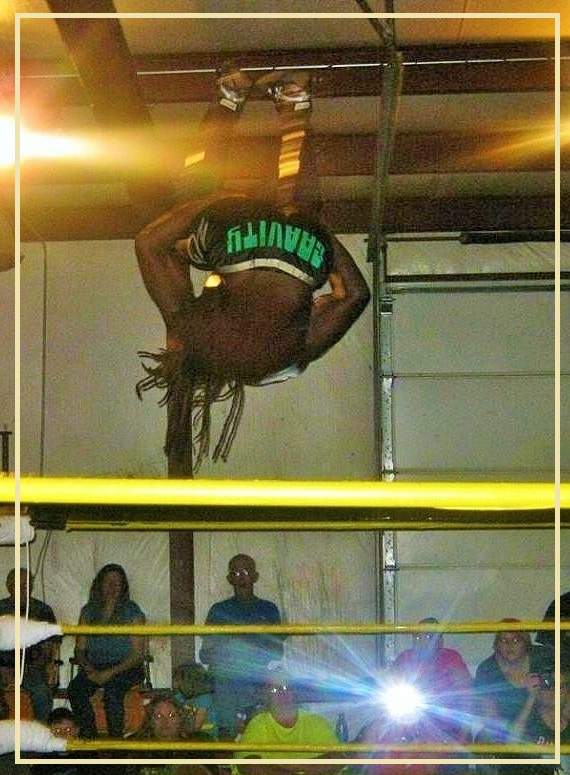 Now, older and much wiser, he is committed full force to not just his career… but in being an astronomical influence on his family, and beyond. He’s reached out to even more promoters for bookings and partnered up with the people at Bellringers Athletic Gear to sponsor him.

“I’m 25, but I had to carry myself like I was much older at a young age. I’ve been down, I’ve been out, with no place to go before. I have been there and done that, but now, things have changed for me and my family.”

And that’s where, at the end of the day, the up-and-comer says he tries to remain grounded. No matter how far he travels, his biggest fans are still at home, and his roots are firmly planted.

“My daughter is a full-blown, Zero Gravity fan,” he laughed. “She likes to tell her friends at school about her Daddy being a wrestler. That’s one of the biggest reasons I do this. To be that positive influence in somebody’s life. Not just for my kids in my family, but really for all the kids that come to see us.”

In some ways, he says, he has added elements of his real life into his character.

“A lot of it is about giving back. I have a lot of little cousins and kids that look up to me now,” Daniels said, as he eyed this weekend’s trip, to Pure Pro Wrestling on Saturday and AIWF is Sunday. Next week, it will be Rutherferton, NC for Underground Independent Wrestling, before swinging over for a stop with East Tennessee Championship Wrestling . “I do a lot of stuff the crowd pops for, so I’m usually the ‘good guy’. My character is Mr. Zero Gravity, and that’s really who I am. I’m a high-flyer, and I do the kind of stuff that you would see in outer space.”

“My whole catchphrase is, Are you willing to defy gravity? People can get behind that, because it’s more about me and who I am than just the wrestling.”