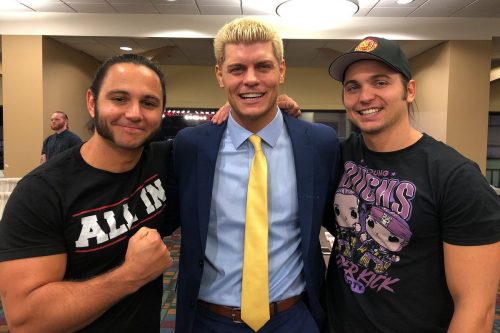 After weeks of speculation, All Elite Wrestling is now official.

AEW was officially announced at the end of a Being the Elite episode that was uploaded at midnight Pacific time on January 1, 2019. In addition to the promotion, the episode also announced “Double or Nothing” — the sequel to All In.

The Young Bucks, Cody Rhodes, and Hangman Page were included in the reveal of AEW and Double or Nothing. SoCal Uncensored (Christopher Daniels, Frankie Kazarian, and Scorpio Sky) were also part of the episode.

There will be a Double or Nothing rally at TIAA Bank Field (the home of the Jacksonville Jaguars) in Jacksonville, Florida at 5 p.m. Eastern time on Tuesday, January 8, with more information about Double or Nothing and AEW being revealed then. The advertisement notes that the rally will include a “special announcement from The Elite.” The Young Bucks, Cody & Brandi Rhodes, Hangman Page, Daniels, Kazarian, and Sky are featured on the ad, and it says that there will be more special guests … Read the Full Story HERE

3 thoughts on “ALL ELITE WRESTLING IS OFFICIALLY ANNOUNCED”