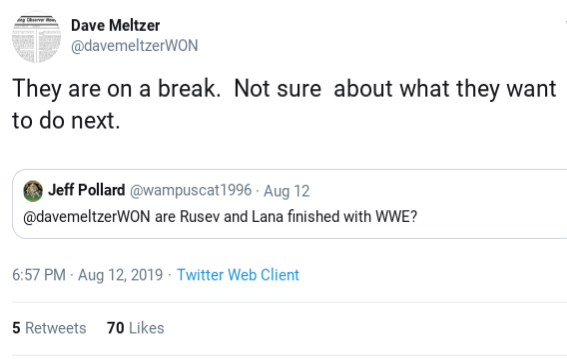 Superstar unhappiness is becoming the norm in WWE as yet another popular act could be on its way out of the company.

In response to a fan’s question on Twitter, the Wrestling Observer’s Dave Meltzer revealed that their is uncertainty regarding the futures of Lana and Rusev in WWE.

Meltzer reported back in June that Rusev’s contract “expires relatively soon,” and though it’s still not clear exactly when his contract runs out, it’s a telling sign that he reportedly asked for his current hiatus, which—aside from a brief return for Super Showdown—extends all the way back to WrestleMania 35 in April. That hiatus came almost exactly a year after Rusev apparently requested his release from WWE, though it was never made public whether or not Lana was looking to exit the company as well.

Back in June, it was reported that Rusev still “wants out” of WWE but that Lana was trying to convince him to re-sign with the company. Both stars have seen their roles in WWE diminish over the past couple of years to the point where Rusev openly expressed his dissatisfaction with his spot… Read More HERE