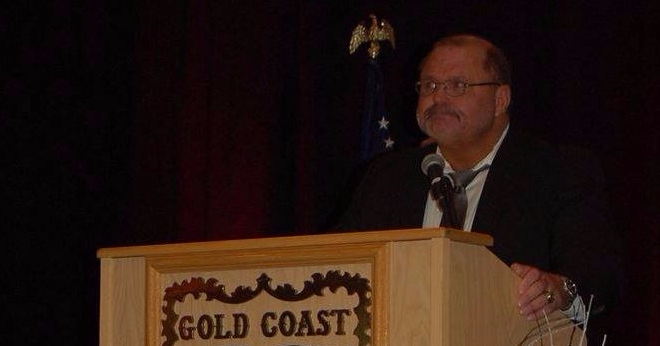 Absolute Intense Wrestling is proud to present a once in a lifetime opportunity to meet one of the most respected and highly decorated professional wrestlers of all time, “The Enforcer” Arn Anderson who will be coming to Absolution 12 on Friday, July 21st, 2017 for a special meet and greet taking place from 6:00PM-7:30PM before the event at Our Lady of Mt. Carmel 1355 W 70th St, Cleveland, Ohio 44102 .
Arn has one of the most impressive resumes in the professional wrestling industry. A founding member of the legendary Four Horsemen, “The Enforcer” was a four time NWA/WCW Television Title holder, a five time NWA/WCW World Tag Team Champion, and a WWF World Tag Team Champion.
Following his retirement as an in ring competitor, Anderson became one of the most respected behind the scenes voices in wrestling, leading to his employment with World Wrestling Entertainment.

Photo Op/Autograph Pricing will be released closer to the event however VIP ticket holders will get first access to the meet and greet session. The Cauliflower Alley Club Honors JJ Dillon and the 4 Horsemen!

In 2010 Tully Blanchard joined International Network of Prison Ministries, where he serves on the Board of Advisers.

Tully is a semi-retired 2nd generation wrestler who on November 13, 1989 became a born again Christian where he currently preaches Christian gospel to prison ministry inmates. In 1992 he became an assistant coach at Charlotte Christian School. His ex-wife Courtney married Magnum TA in March 2005.
This past April Tully was awarded the Cauliflower Alley Club’s Iron Mike Award during which time he made a very emotional speech which can be seen on Youtube.
Arn himself received the CAC Lou Thesz/Art Abrams Lifetime Achievement Award in 2016 and currently serves as the senior producer of WWE RAW.
Recently, I caught up with Baby Doll Nickla Roberts. I recalled to her the time when on WTBS-TV and also in Pro Wrestling Illustrated she stated that “I’ve got the goods on Dusty Rhodes!” I never saw anything more on this. When I asked her what that was all about, she merely stated, “That’s between Dusty and me.” It has since been an honor to have her among my many Facebook friends.
Papa Stro: “I remember the first time Papa met Ole Anderson. First thing he told me was “You’re one ugly mf’er” . Made me laugh and replied “Why thank you!” . We both laughed and been friends ever since. Was an honor to be trained by the Andersons. Respect and love always. Forever grateful.”
Strat: The first time I met Ole was in the mid 1980s when then acting Promoter Henry Robinson tried to keep me from shooting ringside at Cleveland Heights High School. Ole then said, “He has no reason to do this. I give you permission to shoot ringside only, but not in the back.”
Thank you Ole, for all that you have done for the wrestling world!
Psycho Pat: “The 4 horsemen were the original 4 men tag team heels, and a credit to thuggery. The later 90?s version showed everyone how good they really were in the 80?s.”
– Transcription, article & photos by Paul Stratoti unless otherwise noted.
Pre 2000 wrestling results compiled by Ray Baka