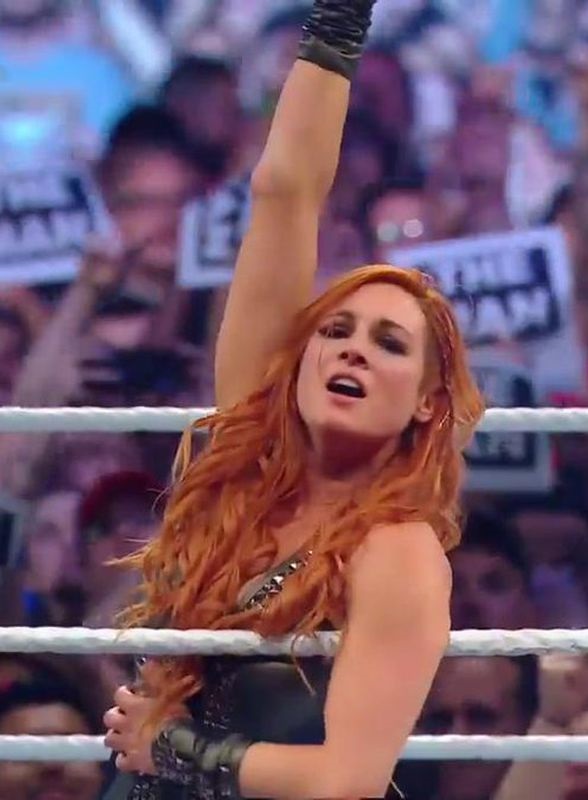 Becky Lynch defied the odds in Wrestlemania 35, beating the redoubtable Ronda Rousey to become the women’s double champ. It was dream come true for Lynch, particularly given that it was the WWE’s first ever all-female main event for its flagship show. With her impressive victory, “The Man” added the Raw Women’s Championship to her list of accolades, along with the SmackDown Women’s Championship she already holds.

“Anything is possible now, man,” Lynch proclaimed, still on a high after her career-defining victory. “Anything. It’s hard to put into words how I’m feeling right now. It’s so overwhelming. I’ve worked for this my entire life, I’ve dreamed about this, I’ve obsessed about this moment and I never knew how I was going to feel.”

Unfortunately for Lynch, her reign as double champ might come to a quick end – perhaps as soon as this spring’s Money In The Bank pay-per-view. The MITB PPV will be held this May 19 at the XL Center in Hartford, Connecticut, and will feature Lynch in a title match with Raw’s Lacey Evans. The former NXT star attacked The Man in the Raw episode immediately following WrestleMania 35, and that evidently set the stage for this showdown, which is already generating some buzz. Now, Lynch is still perfectly capable of beating Evans. But there are two complications.

The first is that The Man will also need to defend her SmackDown belt, against Charlotte Flair – and on the very same MITB PPV. The WWE hasn’t announced which match will go first, but it’s safe to say that even if Lynch wins her first match, she’ll be at a big disadvantage for the second.

One of her titles – whichever she defends second – is pretty much automatically in serious jeopardy. If anyone can handle the challenge it may be Lynch, but she likely won’t be favored to. The U.S. sportsbooks online will likely have updated odds posted soon for Money In The Bank, and we’d expect to see at least one of Lynch’s opponents given a serious chance to win. With Evans, Lynch will have to deal with relentless aggression; with Flair, technical proficiency will be the challenge. But the real issue will be whichever challenger gets to take on Lynch when she’s already fatigued from her first fight.

The second complication for Lynch is the timing of the women’s MITB. If it is the main event, and we doubt that it would be, then it won’t be an issue. But chances are this particular MITB will be held before one or both of the Lynch title matches. If so, it will definitely matter, as Lynch may very well have to face a third opponent: the winner of the women’s MITB. One way or another, it’s just shaping up to be an exhausting night for the double champ, and potentially one with too many hurdles to overcome.

At the end of the day, The Man can still emerge from MITB as the double champ. But chances are she’ll lose one of her belts at least. The worst case scenario is that Lynch will lose both of her titles. That would be a sad development given how she has worked her way up the proverbial ladder. She is now at the top of what is likely the most talented women’s division in history, but has been put in a very precarious situation by the WWE/

Then again, if she comes through unscathed, Becky Lynch will be approaching legend status.