Fans who watched the formative days of Total Non-Stop Action Wrestling will remember their steady official, Mike Posey.  He was one of the original group of referees for the company, and would eventually move on to WWE’s Deep South Wrestling and ECW, before making a few returns for TNA.

In a recent interview with TheGorillaPosition.com, however, Posey discussed another aspect of his career that goes beyond the stripes.

Posey is taking a similar path of current NXT referee Drake Wuertz. The former Drake Younger logged many miles in CZW, IWA: Mid South and PWG among many other places before signing with WWE to don the stripes. While Posey currently wears the stripes for Ring of Honor, appearing on their huge Final Battle pay per view this month, he also spends time in the ring wrestling in several promotions.

“I started out in my career working some shows in Alabama for a promoter named Jack Lord,” Posey said. “I have always been a ref, but still worked a few matches here and there.”

By that time, he had already made the rounds as a ref, appearing in a variety of major organizations including NWA Wildside. In his many travels, Posey has gone from working the six-sided rings of TNA to the monstrous rectangle of WWE as the first referee to join WWE’s development promotion Deep South Wrestling. Along the way, he says he felt like he adapted quickly.

“Most of that (working different companies) has a lot to do with who you’re in the ring with,” he said. “Like in Ring of Honor, it’s a lot faster-paced, and there are a lot of spots, so you pretty much try to stay out of the way.”

“In [WWE] ECW, I would get more involved, and you talked with the guys more. For me, it was always about the type of match and the guys that were in the ring with me.” 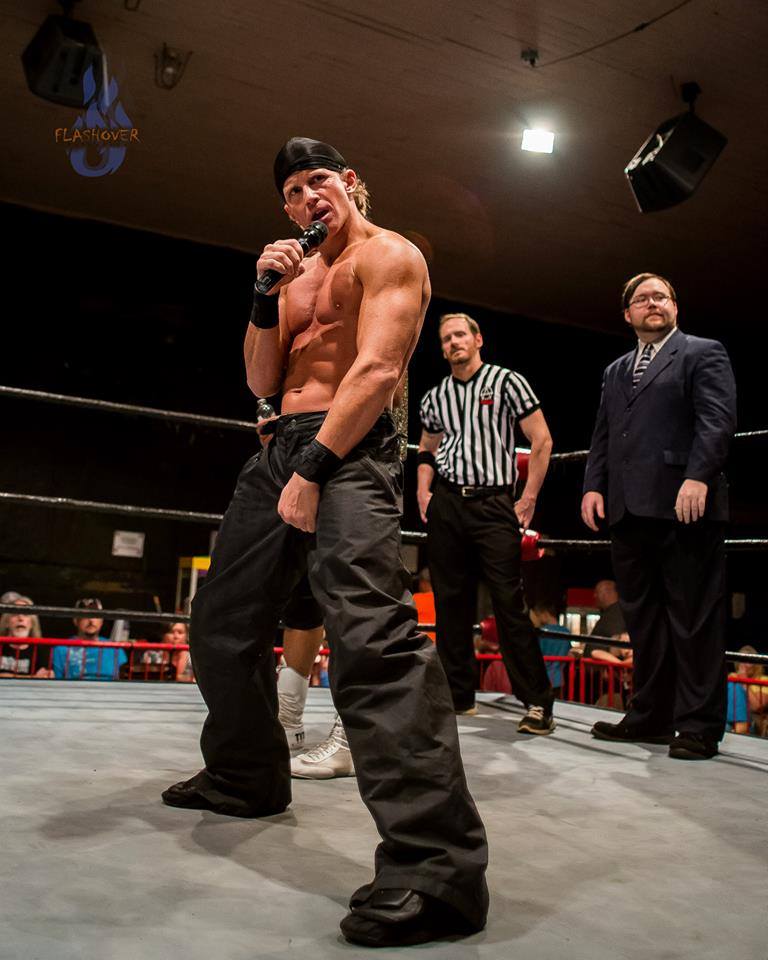 Now working on the indys, he has an almost totally different persona. His character, P-Dog, is a brash rapper, a far cry from the mild-mannered official.

“It’s really different,” he says. “Especially for the people who have already seen me as a ref. They see me doing the rapping thing, and they like it. They really get into it.”

“As far as in the ring, I would say I’m more old school. I’m not afraid to use rest holds during my match. A lot of people now, they get away from that. But, I like to use that psychology, and tell a story in the ring. I think my time working as a ref helps.”

Posey has parlayed that experience into championships all over the country in the past nine years. From holding the NWA Ultimate Tag Team Titles with Wes Adams in April of 2009, Posey has also held the APW North Georgia Title, the NWA Pro South All Out and Tag Team Championships, the RPW TV Title, the PWA No Limits Title and, most recently, the Anarchy Tag Team Titles with CB Suave, defeating Slim J and no less than Evolve standout Fred Yehi.

Even though many ‘smart fans’ recognize his name, Posey’s appearance is vastly different as a wrestler. Aside from the hip hop gimmick, many in the audience may be surprised by his physique. When he takes off the stripes, he looks like a wrestler.

“Some people- smart fans, I guess -will say something or yell stuff about me being a referee.  But really, it’s just something different.”

As far as his future, Posey says he will continue to be a steady hand for ROH, but he’s open to any opportunities that come his way.

“I’m good with whatever. If a company wants me to referee, then I will. But,l if I get the chance to wrestle, I want to do that, too. I just want to see how far I can take both sides of it.”