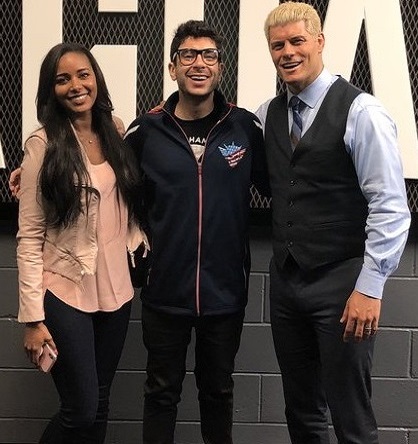 Cody Rhodes rewrote his career’s narrative in 2016 when he washed the face paint of the Stardust character off his face for the last time, waved goodbye to Vince McMahon’s World Wrestling Entertainment and set out to prove he did not need the mass marketing machine of the biggest sports entertainment company in the world to be a star.

Acclaimed runs in Ring of Honor and New Japan Pro-Wrestling, friendship and a business relationship with The Young Bucks gave way to a spectacle known as All In, which drew 11,263 fans to the Sears Centre right outside of Chicago on September 1, 2018, sparking excitement for the industry at a time when it desperately needed it.

The success of the event inspired a business venture with Tony Khan, the co-owner of the Jacksonville Jaguars, and the formation of the first wrestling promotion to be real competition to WWE since 2001.

On May 25, All Elite Wrestling will deliver its first live event extravaganza, Double or Nothing, live from the sold-out MGM Grand Garden Arena in Las Vegas. Rhodes, the executive vice president of AEW, spoke with Bleacher Report about the staggering early success of the show, the state of women’s wrestling and its place in the upstart company, and what fans might expect from AEW … Read the Full Interview HERE