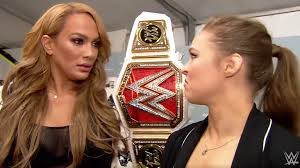 On Monday, Ronda Rousey signed a contract to square off against Nia Jax for the Raw Women’s Championship at the 2018 edition of WWE’s Money in the Bank pay-per-view on June 17.

Despite the fact that Nia Jax will put up a strong fight against Rousey and hold her own in their battle, it should be the latter who utterly dominates the champion before submitting her.