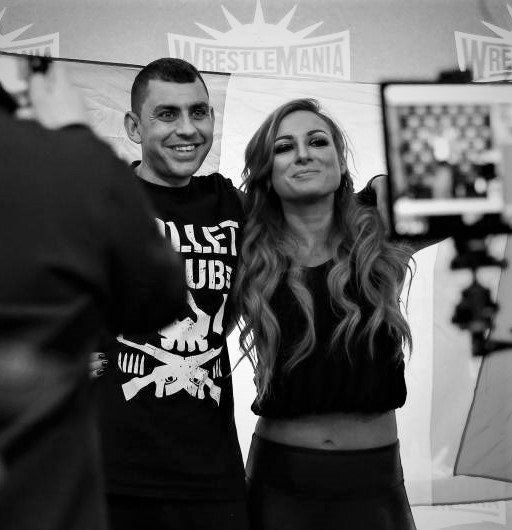 It is noon on Saturday at Brooklyn’s Pier 12, where WWE‘s WrestleMania Axxess fan event will greet over 100,000 people from around the world who are all eager to peruse WWE memorabilia, watch live wrestling matches and wait in lines to meet their favorite WWE Superstars.

Lynch is one of the headliners. Where other stars are available for free to anyone who’s willing to wait in line, the 300 or so fans waiting in her line each paid hundreds of dollars for the chance to get an autograph and take a photo with her.

For two hours, Lynch greets each of these VIP fans with a radiant smile and a warm hug, drawing them in as if she were seeing close friends for the first time in years. She takes a photo in every pose you can think of, including one or two prom-style photos that feel borderline inappropriate, and yet she never stops smiling. Never. It’s a remarkable thing, especially considering that her schedule for the past few weeks could best be described as sunup to sundown. There have been hundreds of media appearances. Her time is no longer her own, at least for now, but she seems genuinely happy, if not a little tired.

“It’s been crazy. I’m kinda running on adrenaline and coffee at this stage,” the 32-year-old Lynch says. “But how could I not be smiling? You know what I mean? I get to main-event WrestleMania. I get to go in as Becky No-Belts and come out as Becky Two-Belts.”… Read the Full Story HERE