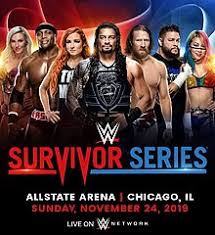 Survivor Series 2019 was, according to WWE, historic. It featured the best of Monday Night Raw, Friday Night SmackDown and NXT. The three brands went to war for the very first time.

On this night, WWE had many first-time clashes on the card. Even if they weren’t booked against each other, exciting matchups were promised, including Roman Reigns vs. Tommaso Ciampa, Roderick Strong vs. AJ Styles and Asuka vs. Io Shirai.

Not everything went exactly as planned, though. Certain stars could not quite get their expected spotlight while others made the most of the moment.

NXT especially did not spurn its chance, and the underdog brand in this rivalry punched the main roster in the mouth.

Sunday’s pay-per-view set the stage for stars, who will be remembered for many months to come, to rise and fall … Read More HERE