A captivating, quick read that will appeal to fans of fantasy drama, “Carla” pulls the reader in, and doesn’t let go… 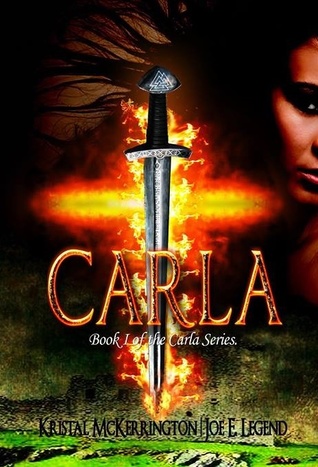 In this mythological coming-of-age story, a young girl is suddenly granted immortality. Her decisions from there forward will decide the fate of other immortals.

Both authors come to the genre from very distinct artistic backgrounds: she is a former dancer, while Legend is an internationally-known professional wrestler.

That mix clearly works, as the characters in “Carla” also display diversity themselves, in what can be a sometimes forced style. The backdrop of Norse mythology could easily cause the book to trail off, but there isn’t the usual nonsense that some writers fall into when dealing in the fantasy genre.

This book avoids those pitfalls, instead focusing on the issues of trust and loyalty in the face of adversity. In Carla’s journey, she quickly learns that her allies will become her enemies, and she’ll need all her wits to survive. Readers might debate on whether to love or dislike this main, title character: She is alternately heroic and flawed, but always remains stubbornly on course.

The dialogue, despite being set in fantastic surroundings, makes sense to even those who don’t normally digest this type of material. The book’s close will leave you wanting to see what comes next from these two authors. And, the interaction between the characters makes it an entertaining, quick story that young readers will particularly enjoy.

Kristal McKerrington has been a professionally published author since 2010. She writes for Reem Vision and is the former writer of Bishop-Lyons Entertainment. She is published worldwide.

She has been a commentator for TMZ. She is an award winning marketing and promoting author. She is a member of the Romance Writers of America’s Association and recently joined the Erotica Guild. She and Joe are represented by Gilbert Literary Agency. She currently resides in Scotland.

Joe E Legend has wrestled in 45 countries and is on TV in 4. He will be returning to ITV, a UK national TV network in 2014. He is also currently on TV in South Africa. He appears on Israel TV in repeat episodes.

He has starred in films, TV shows and is the face of many wrestling companies worldwide. He has been a heavyweight champion worldwide and travels globally. He has starred in Celebrity Wrestling as the co-host for ITV.