Former Baseball Commissioner Fay Vincent recently did an opinionated column for the Wall Street Journal that MLB doesn’t want to do down the same path as wrestling – after the Houston Astros & Boston Red Sox scandals.

I read the commentary, and as both a fan of wrestling and baseball, I couldn’t get over him thinking there are similarities in a team using cameras and sign stealing to win, as opposed to a wrestler grabbing a handful of tights.

Two different actions for two very different sports and entertainment forums. Wrestlers might use a garbage can to hit someone or scoop slam or suplex their opponent on it. But, they don’t bang it to tell their tag team partner a clothesline or powerbomb is coming. Also, cheating in wrestling doesn’t normally cost the losing wrestler his job, or a demotion to the minors.

What the Astros and Red Sox did was criminal on many levels. Pitchers were ruined after getting lit up or blowing leads. They were sent to the minors, and if you think about this, some of these guys might have gotten one shot and that was it. Now, they can’t get guys out at the major league level, so their careers might be done. 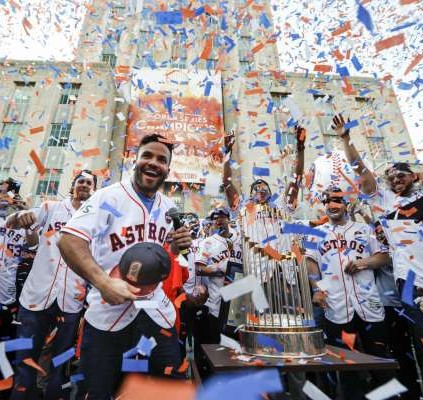 It pains me to state this: I know wrestlers and fans hate it when you use the words scripted or pre-determined outcomes. However, what happened in baseball was not pre-determined; It was outright cheating.

The opposing teams that didn’t have centerfield cameras and equipment right outside the dugout to signal the players on the field what was coming. The clips that came out online are more obvious than a wrestling calling for a clothesline in the corner after a solid Irish whip.

Here’s the other problem I have with baseball players cheating being compared to wrestlers. Here are they are, making upwards of 7 to 8 digits, in the millions every year. Wrestlers making millions are a rare breed. Hell, a lot that make 6 figures is high. The difference is when a wrestler is told to do something in the ring, it’s planned. A baseball player signaling a teammate what pitch is coming is via technology is outright cheating.

This isn’t like Jesse Ventura coming out and telling an audience “Win if you can, lose if you must, but always cheat.” That’s a heel motto not a motto that a baseball player would live by. Baseball players practice their art of hitting, throwing, stealing, fielding and pitching. Wrestlers are performers in and out of the ring. Their skill set whether face or heel is much different because they work together to put on a match. Baseball teams talk in the same locker room about how one team will win a game and the other won’t.

If a wrestler cheats the system and gets caught, they normally get suspended or even worse, terminated. With the baseball cheating scandal, 1 GM and 3 managers got fired because they were caught cheating, but the players keep their World Series rings and money, and act like nothing happened. No apology, no nothing.

The fact that a former commissioner of baseball has the gall to compare what wrestlers do to Major League Baseball’s biggest scandal, is ridiculous to me. Wrestlers travel 200-300 plus days a year, putting their bodies at risk to give the audience a show. There are good guys and girls… and the bad guys and girls.

Baseball players play near 7-8 months a year and they also sacrifice their bodies to win games. There is a home team and an away team. When a team cheats the system to win and gets a slap on the wrist nothing about that screams entertaining, unless you are an opposing fan of said team.

Either way, Fay Vincent — leave wrestling and the fans out of baseball and their scandals. Two different things, two different fan bases. One encourages bad guys to be evil and cheat to win. The other pays players a boat load of money to be the best and win team and individual awards.  When baseball teams have to cheat to get a win they are not the best, no matter how big that World Series ring is and trophy is.

Until Next week… Remember, the Cubs are the last team to legitimately win the World Series.

Mark Mahler is a freelance writer and the Associate Editor of TheGorillaPosition.com. Follow him on Twitter @MGoose37