I will admit before you read this, it is all over the road again. My attention span is about as long a WWE storyline for Mojo Rawley. Non-existent.

I was going to write about Chris Jericho, because I saw a couple other web folk say “Jericho’s in-ring skills” aren’t that good anymore. I was thinking to myself…he’s 48 years young, in better shape than some of the guys the WWE brings back, and people are going to tell me that he isn’t the same in the ring.

Let’s get something straight here, people: aging isn’t fun. We all do it; we all slow down. It’s part of evolution – like it or not. But Jericho, even at 48, is still one of the best wrestlers at telling a story in the ring, and he can put other wrestlers on blast in a promo like no other. I dare anyone to argue with me, and find someone they think is better… because you can’t. Jericho is still the true “Best in the World”.

I’ve said it before. Go watch Jericho’s Raw debut with the exchange between him and The Rock, and then watch his Inner Circle promo. Those are almost 20 years apart and have the same swag, fire and passion as Jericho had when he was a part of the Thrillseekers in SMW. I’d easily rank Jericho in the top 5 talkers in wrestling of all time.

He’s also done something that only the Undertaker has pulled off rather convincingly, and that is continuing to make his character interesting and adjusting himself to the times. From Lionheart to Pain Maker, Chris is in an elite (pun intended) class that didn’t sit there and let his character get stale by continuously doing the same thing. All with the same look, and the same moves.

Let’s talk about the moves. Have his in-ring skills dropped off? People have their own opinions. I don’t expect Jericho the high-flyer to show up any time soon. But I love the more direct, controlled Jericho in the ring that I’ve seen in NJPW and AEW. Keeping a pace is something was great at in the ring. Adjusting to his opponent, check. Evolving his moves, Lionsault, Liontamer, Walls of Jericho, Codebreaker, Judas Effect, seems to be accurate So what do people want? He’s one of the most well-rounded sports entertainers of all time and again adjusts with the time to fit his needs and the companies needs.

Moving on…I read a little ditty about how the AEW women are better than the NXT women. I’m sorry I don’t see it yet. AEW has some solid women’s wrestlers. But not one of them has stood out or has the name recognition that the WWE/NXT women have right now. And that’s not AEW’s fault per se. As of this moment the women haven’t been booked correctly because there is a lot of jockeying to get other people noticed and that is part of the bad thing with a new company. Getting names recognized and out there for the fans.

But there is also an issue with how these women are and have been booked. Bea Priestly and Dr. Britt Baker looked like they were headed for a feud and to me it has been booked sloppy.

I personally think Baker, Priestly, Allie, Penelope, Sadie, and Hiro can all be big, but they need more time and more exposure. Because outside of Allie and Brandi, not a lot of wrestling fans know these women, and what they can do in the ring yet. They need more TV time and more in-ring exposure.

It’s hard to knock what you don’t know, but it’s also hard to listen to someone say how much better AEW’s women’s roster is over NXT when there is literally no truth to that statement. It’s an opinion, not a fact.

NXT has Shayna Baszler reigning and beating everyone along with her teammates Jessamyn Duke and Marina Shafir. They bring over former NXT UK Champ Rhea Ripley and you have a big feud in the making with two powerhouse women. Add Io Shirai, Candice LeRae, Bianca Belair, and Mia Yim to the mix and you have a solid core of wrestlers vying for a shot at the top that are believable.

Then, the WWE showcases the returning Dakota Kai and Tegan Nox. Even though she was used as a jobber Taynara Conti is there, Deonna Purrazzo, Chelsea Green, Kayden Carter, Vanessa Bourne and Alliyah, and you have the makings of a hot dynamic roster too. But here’s where NXT wins this division. They are not only show casing the new talent to fans, they are providing backstories.

Look at the promos hyping Kai and Nox’s returns. If you never saw these women, you were at least given glimpses of what they can do, and the hype machine helps get them recognized by the fans. I’m not saying Kai and Nox immediately should be inserted into the title picture, but Baszler comes out and gives them a little rub and puts in your mind, Ripley, Belair, Shirai, LeRae, and now Kai and Nox are all contenders? That builds the belief that the division is stronger. Quick tell Vince to watch his son in law’s moves and maybe he will learn something about a build and telling a story. But I digress.

AEW hasn’t figured this part out with their women. The build for Allie and Brandi was a good start, but the interference introduction during their match was a total bummer. Anyone that watched Impact knows Allie is a work horse in the ring and has multiple facet characters she can pull out. Brandi was an NXT reject in a lot of people’s eyes, so making it seem like she needed help versus Allie was not the best booking in the world. Put Allie over and build around her. Better yet, take the Priestly and Baker feud and get them PPV time and make one of them a number-one contender. But, give them TV between shows to get over with the crowd and explain and further their feud.

If AEW can do this, then talk to me about how much better their division is over NXT. But as of right now there is no debate. More people can recognize the talent and names when they are used correctly. And Triple H is doing this correctly.

Last, I’m done beating a dead horse, but when you read a blurb that says AEW Obliterates NXT for a third week in a row…I want to know what the hell you are smoking?

AEW beat NXT by 300K viewers. That is not obliterating the competition when week over week the ratings have declined for both shows. Also please view Exhibit A below. This is in the millions, people. 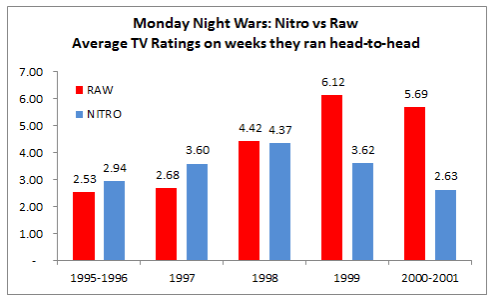 Nitro was “killing” Raw by 1 million viewers in 1997. But the end Raw was “OBLITERATING” Nitro by 3 million viewers. Know your history before making a boneheaded statement like that after just three weeks.

AEW is beating NXT head-to-head in views. But take into account Network subscribers and countries not getting NXT Live, and overall, it’s a lot closer than you think. But here comes the Casual Sheep to point something out. All the comments made by AEW people about not competing is bullshit. But, what they need is to be competing with is Raw and Smackdown. Beat one or both of those shows, and then let’s talk.

But until then, the term ‘obliterating’ is about as asinine as calling Orange Cassidy a ‘real wrestler’.

That’s my take this week. Until next week have a great weekend.