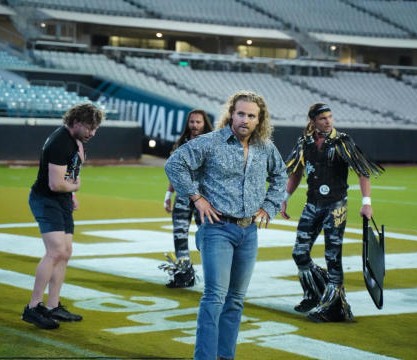 Double or Nothing, All Elite Wrestling’s lone pay-per-view thus far of the empty-arena pandemic period, delivered a show that was entertaining top-to-bottom before ending with one of the wildest matches of the year. In the main event, The Elite, fighting alongside Matt Hardy, managed to outlast Chris Jericho and his Inner Circle in a Stadium Stampede match that saw the 10 competitors brawl throughout TIAA Bank Field in Jacksonville.

The rest of the night’s action took place inside the adjoining venue of Daily’s Place where a trio of competitive title bouts saw two new champions were crowned. First, Cody managed to defeat Lance Archer to become the inaugural AEW TNT champion. But Cody received a small assist from boxing legend Mike Tyson, who stepped up to scare off Jake Roberts just as “The Snake” was planning to interfere to tip things in Archer’s favor.

Nyla Rose, meanwhile, dropped the women’s championship to Hikaru Shida in a no disqualification, no countout match. Shida managed to overcome the consistent onslaught of the larger Rose before finally using the rules — or lack thereof — to score the win, breaking a kendo stick over Rose’s head and hitting a running knee to win her first title in AEW.

In the first of the night’s two main events, Jon Moxley successfully defended the AEW world championship against Dark Order leader Brodie Lee. Repeated Paradigm Shifts from Moxley couldn’t get the job done, so he resorted to a brute-force choke to secure the referee stoppage.

Still, the lasting memory from the event will be the Stadium Stampede match — the wildly-entertaining brawl that featured everything from a 100-yard long series of northern lights suplexes to replay challenge flags to insane dives… Read More HERE