Along with his “intellectual peer,” Rowan, Daniel Bryan changes the climate of WWE by disposing of the WWE Championship for a more eco-friendly version 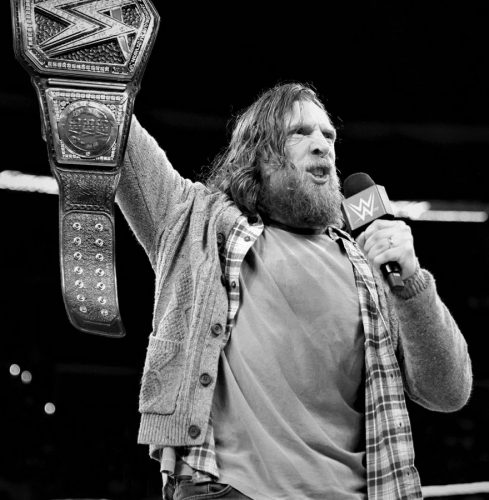 PHOENIX: What started off as WWE Champion “The New” Daniel Bryan revealing a new eco-friendly WWE Championship — but not before throwing the old title, which Bryan claimed “was bound from the skin of a cow that was taken from her,” in the trash, and re-introducing his new running buddy Rowan to the WWE Universe quickly turned into something that changed the landscape of SmackDown LIVE.

Bryan stated that Rowan wasn’t the mindless grunt that everyone perceived him as, but an enlightened man of Earth, and that is why he sees through the “façade” of AJ Styles, who would soon hit the scene to call out Bryan for Rowan’s involvement in their WWE Championship Match at the Royal Rumble event. Randy Orton, Jeff Hardy, Mustafa Ali and Samoa Joe all hit the scene, and Joe ran down everybody before a brawl broke out between all five Superstars, all eager to get their hands on Bryan’s WWE Championship.

Bryan, who was keeping a safe distance away from the insanity by standing on the announcer’s table with Rowan in front of him, soon took the microphone and refused to defend his championship against any of the Superstars in the ring. However, Triple H appeared on the TitanTron with some news for Bryan and all the Superstars: Bryan would not be defending the WWE Title against any one of the men … because he would be defending it against all of them inside the Elimination Chamber on Sunday, Feb. 17!

From there, the chaotic brawl inside the ring continued, with all five Superstars still going at it and an enraged Bryan and Rowan getting out of dodge while they still had the chance.