Ring of Honor’s year-end pay-per-view event, Final Battle, will air live on Friday night from the Hammerstein Ballroom at the Manhattan Center in New York City. It’s become one of the biggest events in independent wrestling, but there’s more intrigue around it than usual this year, as it looks likely that several of ROH’s top stars, including their top draws, could be on their way out of the company after this weekend. 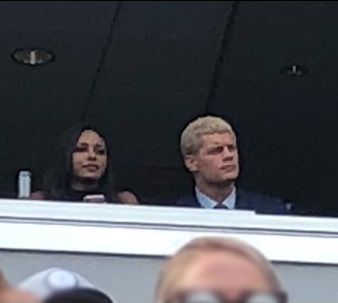 They would be Cody Rhodes (who has been working on a handshake deal after his contract expired), The Young Bucks (whose contracts expire this month), and “Hangman” Adam Page (ditto). Along with Marty Scurll (under contract for another year) and Kenny Omega (not a ROH regular, but under contract with sister promotion New Japan Pro Wrestling through January), they form The Elite, a stable of stars in ROH and NJPW. Normally, the rumors and speculation about indie stars coming off contract would be about whether the free agents would stay put or head to WWE. But, seemingly out of nowhere, a new player appears to be entering the game: Jacksonville Jaguars co-owner Tony Khan, who has positioned his new promotion to steal some of the brightest stars in the sport.

Khan’s new promotion was first broken by SEScoops.com on October 19th, with Chris Jericho and Jim Ross mentioned as point men and the outgoing, ROH-contracted members of The Elite reported as already being committed to signing. Jericho made a point of denying it, and that was about it for a month or so. Then, in late November, Reddit users spotted that, earlier in the month, a number of trademarks had been filed by “All Elite Wrestling, LLC” with a company address at TIAA Bank Field in Jacksonville, the home of the Jaguars; Delaware corporation records show that company being incorporated on July 17, 2018. Those trademarks included the company name and titles for a TV show—Tuesday Night Dynamite, which is notable because it would fill a familiar night … Read the Full Story HERE