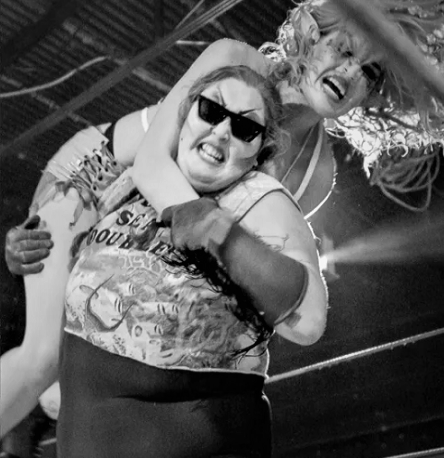 NEW ORLEANS— Late on a Saturday night a little over a week before Mardi Gras Day, a warehouse in a semi-industrial corner of downtown is thumping with bass and jammed to its damp cinderblock walls with people, with more spilling out into the gravel yard.

Inside, the temperature is at least 10 degrees warmer than the balmy night outside, and the combination of body heat and lingering humidity has coalesced into a miasma of sweat and other bodily effluvia so thick you can practically scoop it out of the air. By the end of the night I feel like I have literally inhaled, in the form of that swampy, fragrant vapor, enough discarded cells to make up one or maybe two small whole human beings, who are now cavorting together in my lungs.

Despite the temperature, the two opening wrestlers, Hank Fields and Ivanka Claiborne, start their match cloaked head-to-toe in hats, beards, and capes stitched together from what looks like several dozen thick human-hair wigs apiece. As the contest heats up, they flip and bodyslam and strip, essentially depilating themselves of their costumes until they’re down to duct-tape pasties and fur underpants. They wobble along the top of the ropes and lift each other in the air, hitting the mat with hard thuds. A pre-recorded video places them in the context of a complicated backstory about a post-climate-crisis wasteland. “They’re leaders of two warring factions of the apocalypse!” the narrator shouts. Then, they kiss … Read the Full Story HERE