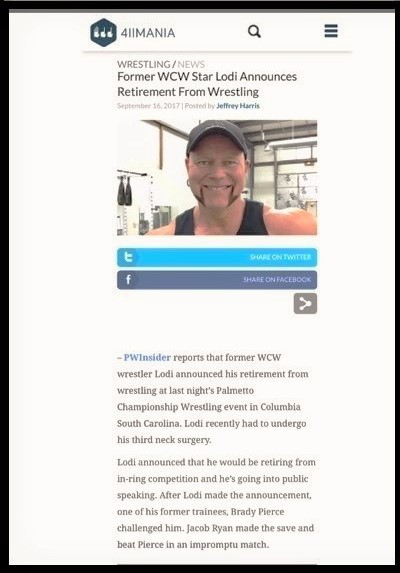 Brad “Lodi” Cain, who was recently featured in a story here regarding his current medical status, says that despite reports circulating on the internet, he is NOT retired.

The former WCW star and member of Raven’s Flock spoke to TheGorillaPosition, after some stories surfaced on the internet stating that he announced his retirement at last night’s Palmetto Championship Wrestling show.

While he is currently recovering from injuries, Cain has been inactive. But, he says while he has a ‘long way to go’ before he can return to action, he has not officially retired from the ring.

Cain has been battling serious neck problems that have caused pain and paralysis in his left arm recently. He addressed his health issues with the crowd, apologizing for not being able to wrestle.

Lodi said that while doctors have told him that wrestling again would be nearly impossible, he quickly added that he ended off the speech with the phrase, “Never say Never”.

Video of the speech can be seen here: LODI -Palmetto Championship Wrestling