After their incredible battle at New Japan’s ‘Dominion’, Cody Rhodes and Michael Elgin will bring their rivalry home when they meet again on Sunday at Glory Pro Wrestling in Belleville, IL.

The heavily anticipated re-match will take place nearly a month after their June 11th classic, which saw The American Nightmare defeat Elgin before a crowd of 11,756 in Osaka Hall. The bout, and the show, received widespread, critical acclaim from both fans and observers.

Elgin said that he’s been waiting patiently for another shot at Cody. As the matchmaker for the Glory Pro promotion, he was the man who decided that it was time to settle the score against one of wrestling’s biggest international stars.

“Cody brings a heritage in wrestling that not everybody has,” Elgin, the former Ring of Honor World champion, says of his opponent. “I think he’s been so successful, because he didn’t just sit around and wait.”

“He decided he didn’t want to be Stardust; he wanted to be Cody Rhodes. He wanted to get out there and do his own thing, and I admire that.”

And, a late addition to spice up the card is a feature match with global flavor, pitting Donovan Dijack against Naomichi Marufuji. 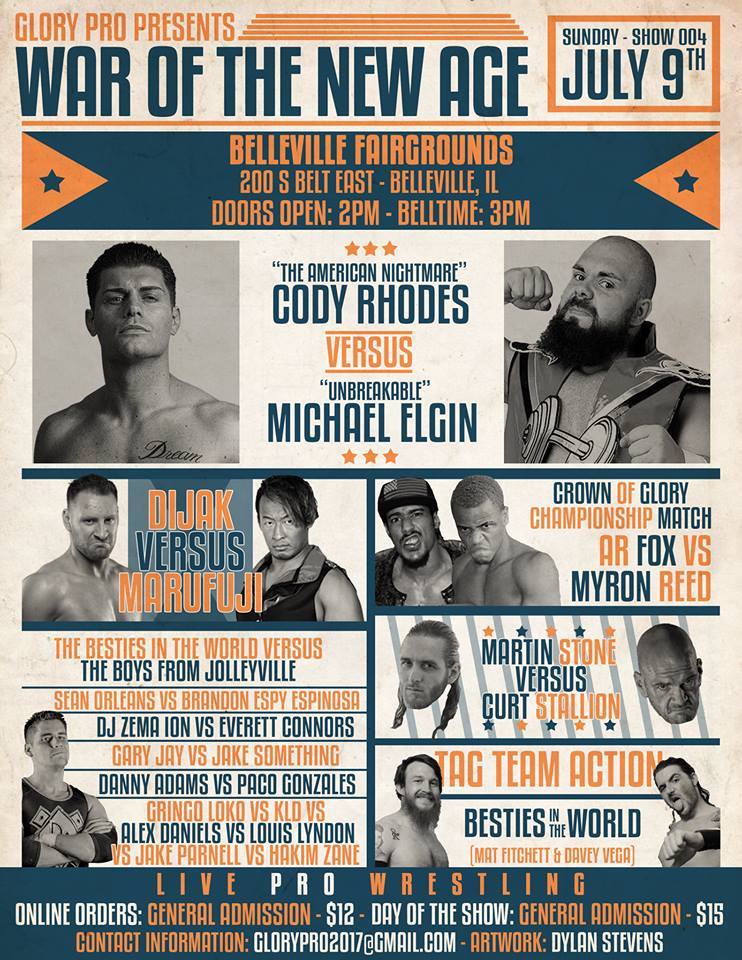 The event will be a big one for upstart Glory Pro, which began running shows earlier this year. The company’s crown jewel is the “Unbreakable” Elgin, a former Ring of Honor titleholder and 250-pound bulldozer. He says that events like this are a sign that indy companies are finding new ways to excite their customers- bringing in big names while still controlling costs.

“This is our first time in this building, and we want to continue to bring more shows here,” Elgin said. “We’ve kept very affordable ticket prices, brought in some big names and bring the people close to the action.”

“What’s going to be great about (the match) this time is, it’s happening in a smaller venue. You’re not 40 feet away from the ring. There are so many different characters and colors that an independent wrestling show provides.”

“It’s incredible to be live at an event like this. I’ve wrestled since I was 16, and been all over the world, and there’s just nothing quite like it.”

For fans planning to attend, Glory Pro says that they have reached their pre-sale limit, but some tickets will be available the day of the show. Doors open at 1:30 PM, with a bell time of 3 PM.

There will likely be a big reception for Cody, a member of the Bullet Club and one of the most trending names in pro wrestling circles right now. The son of the legendary Dusty Rhodes has been popping up seemingly EVERYWHERE since departing WWE. As the current Ring of Honor World Heavyweight champion, his name on the marquee alone makes Sunday’s event a hot ticket.

“He’s all over the place,” Elgin said.  “He’s booked all over the world, because he’s not content to just relying on the name ‘Rhodes’. I think that’s why he’s one of the best in the world right now, and I’m looking forward to getting him back in the ring on Sunday.”

When he steps through the ropes, Cody will be wearing the ROH title- a championship that Elgin still covets. And while the belt isn’t scheduled to be on the line, Elgin says he may just make a challenge anyway.

“You never know what could happen.”