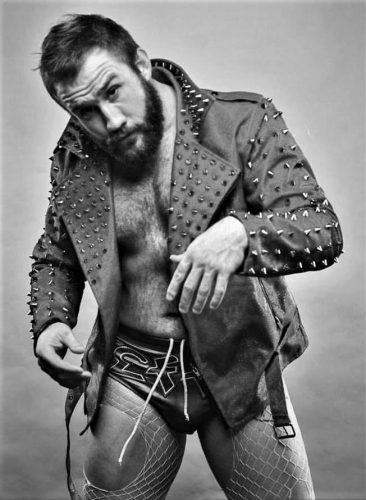 With fishnets on, a strange sense of humor, and trunks that proudly proclaim “Daddy” in classic Barbie font, Florida-based wrestler EFFY has been taking the world by storm with his punk rock attitude and refusal to blend into heteronormativity.

I first encountered EFFY in the summer of 2018 while he was in the middle of his reign as the Fest Wrestling champion. He was admittedly a wrestler whose reputation had proceeded him as a very out and loud queer wrestler who had dubbed himself a “feminist icon.” I was definitely intrigued from the reputation, but from the moment I saw him walk through the curtain to face Ashton Starr at Atlanta Wrestling Entertainment, I was totally enraptured by this proudly queer wrestler clad in fishnets and pink glitter walking out to ‘Yellow Brick Road’ by Elton John.

Since that night, EFFY has only continued to take the wrestling community by storm, with a small portion of it being due to his controversial match with Bayley superfan Izzy last summer. Savvy, sexual and downright hilarious, EFFY has his fingers on the pulse of what makes wrestling fun in the modern age. Though, he might also have his fingers elsewhere, too, if some of his matches are anything to go on.

Recently, I sent EFFY some questions about being a gay wrestler in the south, his match with Izzy, his video content game, the future of punk and wrestling, and his pick to win Rupaul’s Drag Race: All Stars 4 … Read the Full Story HERE