All Elite Wrestling made several announcements at their recent “rally” about the future of the company, but there are still several unanswered questions about what comes next for the promotion run by The Young Bucks, Brandi Rhodes, and Cody Rhodes. 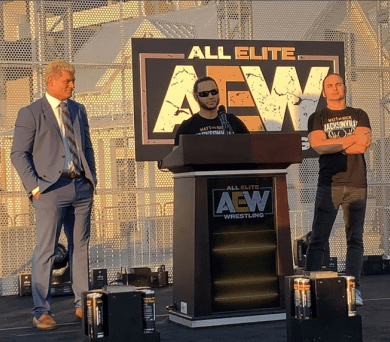 On Tuesday, the newly formed All Elite Wrestling held a “rally” in Jacksonville, Florida to make some initial announcements. This including signings such as Britt Baker, Penelope Ford, PAC, and Chris Jericho as well as All In: Double or Nothing taking place on May 25 in Las Vegas at the MGM Grand Arena.

There was also enough use of the Tony Khan owned Jacksonville Jaguars to make the synapses of any fan of The Good Place absolutely overload. (If only Blake Bortles or Manny Jacinto were there to give an endorsement to the new promotion…)

While the showing of talent was impressive and the hype was definitely real, there were still a lot of deeper questions in the air about the future of AEW that weren’t fully answered.

Sure, there’s a lot of talk of “revolution” and the excitement over WWE having some real competition for the first time since the Monday Night Wars, but that talk didn’t answer all the questions we had going into the “rally”. It’s easy to imagine that some of them will be answered in time, but for now, here are the lingering questions we have for AEW going into Double or Nothing … Read the Full Story HERE