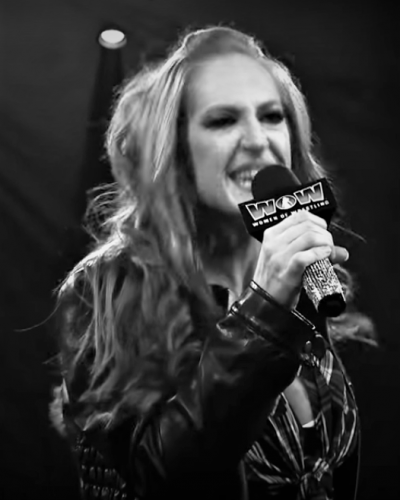 Women of Wrestling made their debut on AXS TV and put on exactly the kind of show that is going to keep fans coming back week after week. From great wrestling to powerful characters, WOW has already become must-see wrestling.

Even if you’re not familiar with the history of Women of Wrestling or the show’s connection to GLOW, there’s no denying the entertaining hour of television they put together this week. From start to finish, every single moment helped bring fans in and show us what WOW will be moving forward.

The current WOW World Champion is Santana Garrett, and they’ve already established her as the beloved face of WOW in a single episode. The night’s main event saw Garrett defending her title against WOW legend Jungle Grrrl. Garrett was in control, but a distraction by Tessa Blanchard cost her the match

Tessa went after Santana’s dad in the crowd, even going as far as to pull on the tube from his oxygen tank! The distraction led to Santana getting counted out, but everything broke down from there … Read the Full Story HERE One thought on “FANSIDED: W.O.W. Delivers A Perfect Debut That Has Fans Hooked”