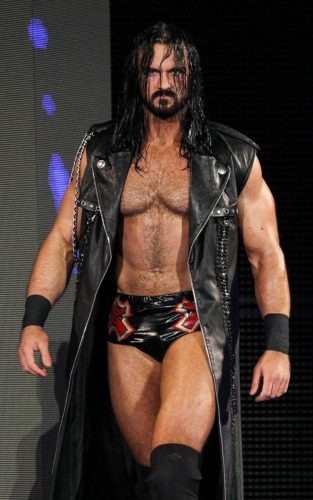 Don’t look now, but WWE seems to be waving the white flag on one of its best all-around talents.

Just a few short months ago, this rising star hadn’t even lost a match during his stint on the main roster. He was also one of the clear betting favorites to win the 2019 Royal Rumble match and had even been linked to a potential Universal Championship match at WrestleMania 35. Then, he didn’t even make it to the final four of the Royal Rumble and found himself without a match at Elimination Chamber this past Sunday.

Any guesses as to who that star might be? Well, forget a hint. Here’s who it is: Drew McIntyre.

It wasn’t all that long ago that McIntyre appeared destined for greatness as the best pushed heel on Raw and the top villain on the show whenever Brock Lesnar wasn’t around. Then, a surprising TV loss to Dolph Ziggler in December 2018 ignited his downfall. Not long afterward, he lost to Finn Balor at WWE TLC, lost a No. 1 contender’s match for a shot at Lesnar’s Universal title and then had a disappointing performance in the Royal Rumble. Since then, he’s played second fiddle to go-away-heat magnet Baron Corbin during Corbin’s feud with Braun Strowman

So, what happened to McIntyre’s push? And how did it come crashing down so quickly? Your guess is as good as anybody’s … Read the Full Story HERE

One thought on “FORBES: WWE Is Throwing In The Towel On One Of Raw’s Most Promising Stars”