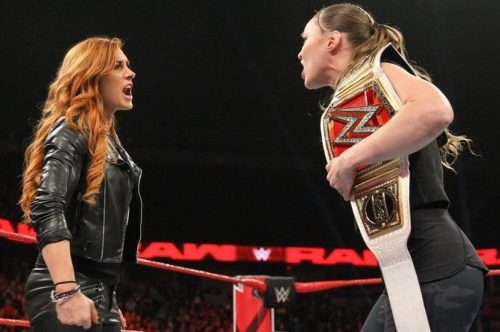 WWE will likely make history at WrestleMania 35 when Ronda Rousey and Becky Lynch are expected to participate in the first-ever women’s match to main event the company’s flagship pay-per-view.

Exactly what that match will be, however, isn’t 100% certain. According to Wrestling Observer Radio’s Dave Meltzer (h/t SEScoops), the plan is to eventually add Charlotte Flair to the announced Lynch vs. Rousey match to make it a triple threat match, something WWE essentially did on Raw when Vince McMahon removed Lynch from the match and replaced her with Flair. But Sports Illustrated (h/t Cageside Seats) reports that Rousey and Lynch will indeed do battle in singles action as WWE has already advertised:

Becky Lynch vs. Ronda Rousey is scheduled for the main event of WrestleMania 35, as SI reported, but Brock Lesnar vs. Seth Rollins will also be referred to as the main event during the build up to the match.

Judging by what happened on Raw, however, that match is a lock to be a triple threat.

WWE may call Rollins vs. Lesnar the “main event,” but anyone who has watched WWE programming in recent months knows what the real main event of the show is. Whether it goes on last or not, whatever bout features Rousey, Lynch and the Raw Women’s Championship should have the honor of getting top billing at the biggest pay-per-view of the year, and though WWE seems determined to ensure that Flair gets a spot in that match, WWE shouldn’t force her into it just … Read the Full Story HERE