WWE Raw was business as usual for WWE as it continues to shrug off negative press ahead of its forthcoming trip to Saudi Arabia for the Crown Jewel pay-per-view on November. 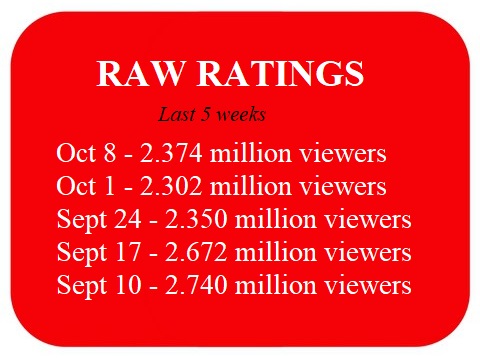 Though there was no direct reference to the Kingdom of Saudi Arabia throughout the broadcast, Raw advanced several of the top storylines for Crown Jewel. The Undertaker and Kane accepted D-Generation X’s challenge, while WWE held two World Cup qualifying matches for the event.

Raw’s main event saw the apparent breakup of the Dogs of War triad as Drew McIntyre delivered a pair of Claymore Kicks to Braun Strowman: one on accident, one on purpose.

WWE’s viewership has spent the past three weeks in the all-time bottom-three. Once again facing competition from … Read the Full Story HERE