I watched the HBO documentary about Andre the Giant last week and it stirred up some childhood memories I have of “The Eighth Wonder of the World.” I am a product of the 1980s, so I grew up when Hulkamania was coming out of its infancy and exploding into the unstoppable force that it would ultimately become.

While my fellow St. Louisans were attending church on Sunday mornings, I received my seventh day teachings from Vince McMahon and Larry Matysik on KPLR Channel 11 at 11 am. For those of you who can remember, the Sunday morning lineup on KPLR was Jerry Falwell at seven, Tarzan at nine, Charlie’s Angels at ten (Farrah Fawcett was my favorite), and finally WWF Superstars of Wrestling..

The great thing about Superstars was that unlike today’s wrestling, it was great at the element of surprise. There were no announcements of an injured star returning weeks before the fact. The pop Ricky “The Dragon” Steamboat received when he came back from the “throat injury” due to the actions of “Macho Man” Randy Savage was genuine and organic. The same goes for heel and face turns which leads to me to Andre. 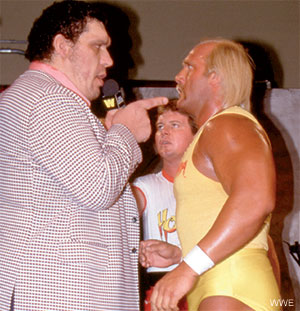 I will never forget “Piper’s Pit” when the then WWF did a tremendous job of leading the viewer on a three-week journey with the Andre and Hulk Hogan trophy presentations, Jesse “The Body” Ventura coming out the next week telling Roddy Piper that things weren’t all they seemed between friends Andre and Hogan, and finally concluding with Andre coming out the final week with Bobby “The Brain” Heenan and challenging Hogan to a championship title match at WrestleMania III.

It wasn’t until I got older that I heard the stories about Andre’s deteriorating physical condition. I was only nine-years-old at the time Andre turned heel, so I didn’t know much about his past before that point. Being young and clueless, I assumed Andre was just your typical big man who was a slow mover. Boy, was I wrong. Do yourself a favor and watch footage of the Giant in the 1970s. It was just insane what a man of his stature could do in the ring.

When the Hogan/Andre feud finally came to a close, the WWE matched the 7’4, 520 pound Giant with the likes of “Hacksaw” Jim Duggan and Jake “The Snake” Roberts before finally having his last singles feud with Intercontinental Champion, The Ultimate Warrior.

At the time, the Warrior was my favorite wrestler besides Hogan and Demolition. The WWE announced that they were coming to St. Louis on November 24, 1989 at the old Arena. For those of you who never had the pleasure, the Arena was one of the best venues to watch any type of event. For wrestling, it was great, but the Kiel Auditorium was better because of the aura that oozed from the building at 1401 Clark Avenue. 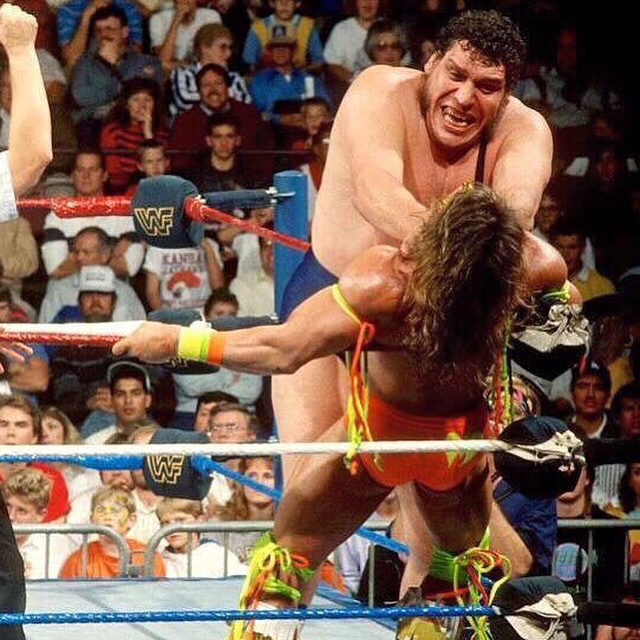 The main event of the November 24th house show was none other than Andre and the Warrior. When Larry Matysik came on the tube and told me to get my tickets for this spectacular card at any Ticketmaster location, who was I to argue? I begged my late father to get a couple of tickets and he didn’t disappoint. He scored us two seats right next to the rails where the wrestlers walked down the aisle to the ring. It was amazing. All I cared about was seeing the main event. Never mind the fact that “The Million Dollar Man” Ted DiBiase was squaring off against Jake Roberts, all I cared about was seeing Andre take on the Warrior.

Roberts won via a disqualification and it was finally time to see what my dad had paid his hard earned money for us to see. Andre emerged from the curtain and slowly walked to the ring. I was standing next to the rail and was in awe of how big he was. It was one thing to see on television, but to see it up close and personal was something else. Andre did his trademark step over the top rope and walked around the ring while looking over the audience. A few seconds later, the Warrior’s classic music hit over the loudspeakers and out came the Intercontinental Champion running to the ring. As the Warrior was running around the ring and bouncing off the ropes, Andre proceeded to mock the Warrior’s shaking of the ropes that he always did before his matches. While Andre was shaking the ropes, the Warrior clotheslined him twice from behind while knocking the Giant down to one knee. Andre rose up and tried to retaliate only to be clotheslined by the Warrior again and dropped to the mat. With the Warrior’s theme still playing, the Warrior bounced off the ropes and delivered his signature-finishing splash to the Giant. One, two, three. The Warrior took the Intercontinental strap and started swinging it around his head in the ring while a dazed Giant tried to get his bearings. The match lasted 30 seconds.

I looked at my dad like “what the hell just happened?” He had a look on his face that said, “I just spent a hundred bucks on this crap?” I actually said to him “Is that it? Is it over?” He replied, “Jason, don’t ask me to buy tickets to wrestling ever again..”

I heeded my father’s words. 11 years later, I laid down the money for tickets to see Monday Night Raw at the Kiel Center and he loved every second of it. Even though it was only half a minute, getting to see Andre the Giant live in person is one of the sports entertainment highlights of my life. He may be gone, but he will never be forgotten.