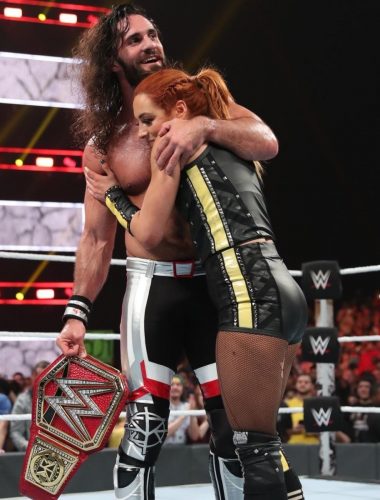 On Sunday night in Tacoma, Washington at Stomping Grounds, Seth Rollins overcame insane odds to retain his Universal Championship–with the help of his girlfriend Becky Lynch. Twitter seemed to hate the way the Rollins vs. Baron Corbin match was booked, with the latter choosing Lynch’s rival Lacey Evans as the special guest referee, but I thought it was a strong booking decision that lacked some execution.

Evans cheated mercilessly throughout the match, which is obviously what she was supposed to do, and Rollins and Corbin worked well around the SGR stipulations. Lynch made her appearance pretty late after Rollins had taken a good amount of damage.

Lynch’s rescue job lacked personality and it took so long for her to arrive, it just became a little annoying waiting for the inevitable. It was obvious Corbin was never going to win the title over Rollins, so there was a ceiling on this thing from the beginning.

This was overall a safe booking that still managed to backfire on WWE Creative. The main event gets a C+ grade from me, but most of the other matches on the evening were better. Here is a breakdown of the grades and analysis from the card … Read More HERE