Tessa Blanchard may have been born into wrestling royalty, but the Impact Knockouts Champion has taken nothing for granted, and has earned the right to be called one of the best in the world.

Being a third-generation wrestling princess is a lot harder than it might sound. 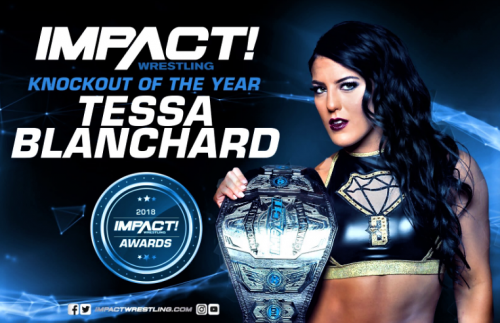 It involves early mornings at the gym, countless hours on the weight machine, and tons of bumps on the mat. It entails gallons of sweat, miles on the road, and many a sleepless night.

Born into a grappling dynasty, Tessa Blanchard might be as close to ring royalty as it gets. The 23-year-old, Impact Knockouts champion took the company by storm when she arrived last year, with most observers now agreeing that she will be a surefire, ‘franchise player’ in women’s wrestling for a long time to come.

She finished off 2018 with not only championship gold, but several other accolades, including being the Impact Knockout of the Year and ranked on Sports Illustrated’s list of the Top Ten Female Wrestlers.

For the up-and-coming star, it capped off a major step forward in her career, where she truly lived up to her label of being UNDENIABLE.

“I just hit my five-year mark since I first began my training,” Blanchard told TheGorillaPosition.com this week, just as she was preparing for Impact’s Homecoming pay-per-view, where she will defend her title against Taya Valkyrie. “And right now, I feel like I’ve really, finally come full circle. At that point, if someone had asked me, where do you think you’d be in five years? There’s no way I could have imagined I’d be here.”

“So, this past year has all been really special to me. Because when I first started, that’s what I wanted to do; Go everywhere, and wrestle everyone, and learn the different styles, so I could be as versatile as I could be. So, I could be one of the best in the world someday.”

Of course, she knows she’s had some advantages along the way. Not many youngsters starting out can turn to two Hall of Famers for trusted advice. Being the daughter of Tully, and also having Magnum TA as her stepfather, certainly gave her an early insight into the business that few others can boast. And, she also acknowledges that having the name, ‘Blanchard’ certainly carries along with it some cache – going back to the days when her grandfather, Joe, was the promoter of the San Antonio territory. 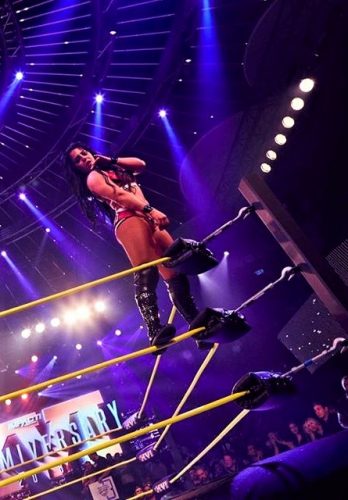 “Early on in my career, I know that I was probably booked on some shows before I was ready,” Blanchard recalled. “They saw my last name, and just wanted to put me on their show because of that. And I’ll be honest, It was probably before I was deserving to. They were just like… yeah, we’ll put her on the show.“

But from the beginning, she was determined to carve her own path.

“I’ve said since day one that my last name might get my foot in the door, and give me an opportunity; I’m not denying that,” Blanchard stated. “But, once you step in that ring, you’ve got to be able to back it up. You got to be able to work hard. And that’s what I do. I work hard, because that’s what’s necessary.”

“You have to go that extra mile. Everybody can look at me, and make all the excuses they want. Like, Oh, it’s because of her Dad or, It’s her last name. But if you work hard, none of that matters… it’s all just bullshit.”

These days, the only pampering this princess gets, is cold steel and coarse canvas. She says it’s the price she pays to keep her edge, as she continues to evolve into one of the best all-around workers in the world.

“Everywhere I go, the styles are different. When you wrestle in Japan, it’s more strong style. When I go to Mexico, it’s definitely more high-flying. And in my matches I’ve had with Taya in Impact, it’s been a lot more ground-based. So, I basically have to be ready for anything, and be able to adapt depending on where I’m wrestling, or who I’m in the ring with.”

Over the course of the past several months, Tessa has hit the gym even harder, transforming her body, all while still she honing her mat skills. She would often update on her Twitter feed throughout the different steps in the process. Soon, her success in the gym mirrored her success in the ring. Blanchard seemed to be borrowing from her Horsemen roots: becoming ‘custom-made, from head to toe’

Combined with her chiseled features and icy glare, Tessa has a strong screen presence, and is simply impossible to ignore when she’s on camera. Everything – from her walk, to her cocky smile, to her devilish wink – exudes the mature confidence of a veteran. 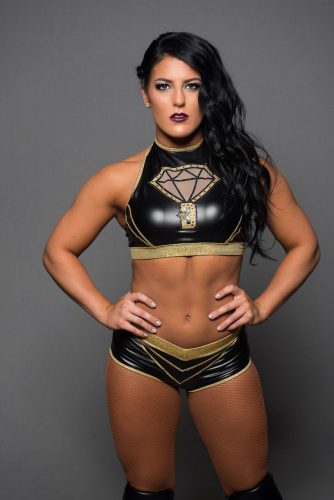 When Blanchard made her debut in Impact Wrestling last May, she quickly cultivated her profile, turning from a prospect, to a bona fide star and someone that company could build their Knockouts Division around.

However, standing in her way this Sunday will be the well-traveled veteran Valkyrie. Blanchard knows it will be a stiff challenge, but Her Highness of Heeldom is confident she will leave the world-famous Asylum with her crown.

“With all the issues we’ve had, there’s still no denying that Taya is one of the best in the world,” Blanchard said. “I won’t take that away from her. But, at the end of the day, she’s no Tessa Blanchard. And I have no doubts that I will be walking out of Homecoming with my title, and STILL the Knockouts Champion.”

Retired Impact Hall of Famer Gail Kim will be the special referee for the match-up, and Blanchard had some thoughts on her involvement, as well.

“I have a lot of respect for Gail Kim. She was obviously a great performer. In my mind, she’s still one of the best in the world. she’s one of the pioneers of women’s wrestling. Gail Kim is one of the reasons I wanted to get into this business. But, just because I respect her, and respect her work, doesn’t mean I won’t steamroll her if she gets in my way.”

From there, she says she will continue to build upon not only her family’s legacy, but also her own. For Blanchard, every day is another step in the arduous process of carving out her own place in history. 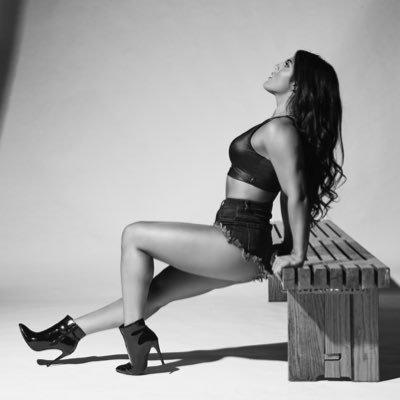 5 thoughts on “HER HIGHNESS OF HEELDOM”