I’ve never formally documented this story, but have shared it with dozens of friends.

During May of 2007, a colleague of mine noted that she was going to interview Chris Benoit on behalf of our college radio station. She was a journalism student and I was a radio broadcasting student. We were working for the college radio station over the summer prior to us moving on to real-world gigs in 2008. She knew I idolized Chris Benoit and quickly realized she HAD to bring me along.

It was May 28, 2007 (my birthday) and we met Chris Benoit in front of the John Labatt Centre, later renamed Budweiser Gardens. He pulled up in a limo and was all smiles.

We shook hands, introduced ourselves and he joked, “Boy, I feel like a ghost.” Mind you, he was very tanned, so I remarked, “If you feel like a ghost, I must be Casper.” He legitimately laughed at loud and then my colleague interviewed him on behalf of the station where it was the typical questions for sound bites. 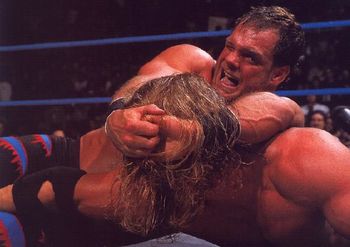 “What’s your favorite move?”
“How did you get started?”
“What can you promise tomorrow on Smackdown?”
etc etc.

I was already answering all of these questions in my head.

Once she was done, I chatted with Chris for nearly 15 minutes and asked him half a dozen questions that were all off the record. He knew these were going to be from a big pro-wrestling fan.

He noted that the J Cup was always a special night and in fact, upon winning the Royal Rumble, the Super J Cup immediately came to mind as he was physically and mentally exhausted. He explained to me that his time in Japan was special and he learned a great deal from his opponents and peers.

We briefly discussed Stampede Wrestling, the Hart’s and then I concluded with this question.

“What advice would you give to AJ Styles, Christopher Daniels and Samoa Joe?” I think they are too good for TNA Wrestling and would love to see them in WWE with you.” 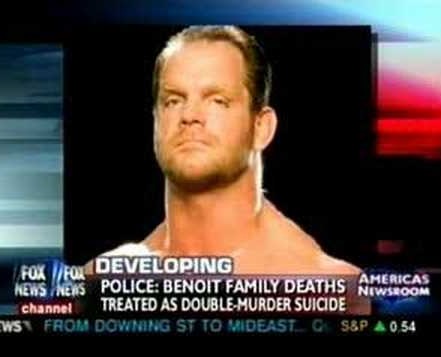 Without any hesitation, Chris noted that each of those men should take a chance by coming over as they would inevitably become successful within WWE. Chris even mentioned that he wondered what it would be like to step in the ring with each of them. Furthermore, Chris felt they were three of the best WRESTLERS in the world. Yes, he emphasized the word wrestlers.

After about 10 minutes of chatting, we shook hands, parted ways and he couldn’t have been a nicer person to me. Chris and I even took this picture together which remained my Facebook Profile Picture until the tragic news broke.

I’ve interviewed a couple dozen wrestlers throughout my radio career and current podcast venture and despite Chris Benoit’s morbid and unforgivable final days, this was one of the greatest birthday memories I’ve ever had.

Chris Toplack is the host of The Signature Spot, which can be found every week at TheGorillaPosition.com as part of The ROAR Network, and on YouTube HERE. Follow him on Twitter @christoplack