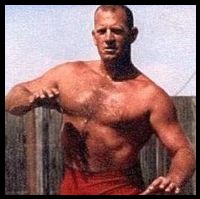 Born August 16, 1929 in Jewett, Texas, Adkisson was a two sport athlete at Southern Methodist University before meeting Stu Hart and switching over to the ring. He was renamed Fritz Von Erich and was soon paired with Walter Sieber, aka Waldo Von Erich. The Von Erich “brothers” would play the stereotypical role of German Nazis. (even though they weren’t really Nazis… or brothers).

In the 1960s Fritz Von Erich would win both versions of the AWA World Heavyweight Championship, and was a star in the NWA St. Louis territory, as well as making regional appearances all over the country. Along the way, he developed the feared Von Erich ‘Iron Claw,’ a signature move that he would pass down to his sons.

With Sam Muchnick’s backing, Fritz would become the promoter for the Dallas Territory, which eventually gained national notoriety under the banner of World Class Championship Wrestling. Names like The Freebirds, Gino Hernandez, Bruiser Brody, Percy Pringle (Paul Bearer) and of course, the Von Erich sons, would be beamed onto television screens all over the country, thanks to a huge syndication deal that Fritz culled together as he built his Dallas empire.

The crowning jewel of Fritz’s Texas territory was The David Von Erich Memorial Parade of Champions event on May 6, 1984 – a tribute to his son who had passed months earlier. A hometown crowd of 43,000 at Texas Stadium saw Kerry Von Erich win the NWA World Heavyweight title from Ric Flair in honor of his brother. The family’s triumph amidst tragedy on a huge stage is considered one of the greatest and most emotional moments in wrestling history.

After battling multiple forms of cancer, Fritz Von Erich passed away at his home in Denton County, Texas. He was 68.