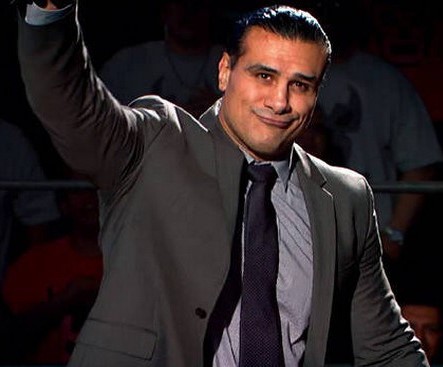 Alberto, who unified the Impact and Global Force World Heavyweight titles at Slammiversary on July 2nd, was tabbed to be the man to lead the company under its new banner. But now, Patron is being investigated for an allegation of domestic violence that occurred Sunday at a Florida airport. A witness said there was an altercation, and alleged that El Patron ‘roughed up’ a female companion, believed to be his girlfriend and WWE superstar, Paige. Since the incident, member’s of Paige’s family have been very vocal in their criticisms of Alberto and the pair’s oft-volatile relationship. Before Jarrett spoke, GFW spokesman Ross Forman stepped forward to re-read the statement that Global released initially:

Jarrett then addressed the media and conceded that he couldn’t legally say a lot involving the incident. However, he attempted to illustrate where the situation stood as of Wednesday afternoon.  “Obviously it’s very unfortunate that… over the last 24-36 hours, Global Force Wrestling officials, Anthem Sports, as well as a host of others that are a part of our team, are currently digging into this matter,” Jarrett said.  “A lot of people have reached out to me. I’ve called up my mentors in the corporate world, some CEOs, some college and professional player personnel people and coaches in sport,” he continued. “I just wanted to pick their brain and get their advice on how to handle this situation.”

As far as the status of the GFW World Heavyweight title, Jarrett said that it was a matter that would be decided in the days ahead. The company will first look to make sense out of the past few days’ events.

“At the end of the day, it truly is on a case-by-case basis when it comes to dealing with athletes and entertainers and other types of public figures. There’s never an absolutely right decision to make or a wrong decision to make.”

Jarrett said he had just spoken with the staff during Global’s weekly meetings.

“I addressed everyone in the room, and said that I will take as much responsibility for this as people want to put on my shoulders. I truly want to make the best decision for all the people in our corporation and the fans. That’s part of my responsibility, as well.”

Jarrett went on to discuss the company’s trip to the east coast trip in August, the GFW’s digital marketing strategy and plans for more pay-per-view events in the future. Unfortunately, the clouds swirling around their top titleholder put a bit of a damper on it.

A very positive story coming out of the conference was Tony Marrero, an Orlando, Florida resident who survived the Pulse Nightclub shooting on June 12, 2016.  Marrero was shot four times in the back and once in the arm.  Marrero and Jarrett talked about the emotional tribute “Remembering Pulse Nightclub, 1 Year Later,” held July 3 at The Impact Zone in Orlando. Marrero also took questions from the press.

MORE DETAILS will be released as they become available at TheGorillaPositon