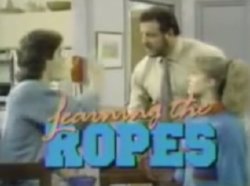 Learning The Ropes was a short-lived Canadian television sitcom which aired for one season in 1988-1989. The premise is Robert Randall is a high school vice principal by day and moonlights as professional wrestler “The Masked Maniac” at night.

NWA wrestler The Italian Stallion performed all the in ring work for Alzado’s Masked Maniac wrestling character. Alzado also made an appearance at Clash Of The Champions II in June 1988 to promote the series.