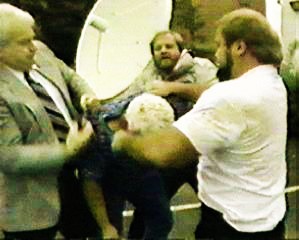 OCTOBER, 1986 – In this classic moment, the Four Horsemen videotape themselves as they stalk, and then attack The American Dream, Dusty Rhodes.

The legendary footage would air on episodes of the Jim Crockett Promotions’ programming, building even more heat in the long-running feud between Rhodes and NWA World Heavyweight Champion Ric Flair.

Wrestling historians will chuckle, as they can audibly hear Rhodes (also the company’s booker) tell his attackers to ‘Make it good!’ for the cameras.

They did, “breaking” Rhodes’ arm, and forever brandishing an image in pro wrestling history on both VHS… and BETA.