For Brad Cain, his spiritual and physical journeys couldn’t be more different. The Bible has given his life stability, while lately, his body has been providing a whole lot of struggle. 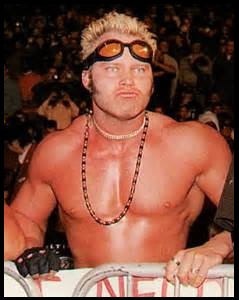 The veteran wrestler, known to fans as Lodi, gained prominence as a member of Raven’s Flock in WCW between 1997 and 2000, and later as the part of an ‘unusually-scripted’ TNA tag team with Lenny Lane. Even though the duo played a pair of openly gay partners, they were both heterosexual. The flamboyant tandem were dubbed, “The West Hollywood Blondes”.

Life since his days in WCW have included not only that short stint in TNA, but also appearances on the independent scene. He wrestled for Dusty Rhodes’ Turnbuckle Championship Wrestling. and helped book and promote in the Southeast. Cain also now works as a personal trainer in North Carolina, operating the Your Flex Appeal studio in Charlotte.

“I was a personal trainer before I ever got started in wrestling,” Lodi said in an interview this week. “I always loved doing this, and personal training is one of those careers, as an adult, that never felt like work. A day at work is just a blessing for me. I absolutely love working with people here at the gym.”

That is, when his body allows him to. In 2002, he ruptured a disc in his neck while on a tour of Ireland for World Wrestling All-Stars.  In May of that year, he had what would be his second neck surgery and thought he was finished in the ring.

“After about 18 months, I was working out with some guys in the ring, and found out I could take could take a bump again. I basically started going then and non-stop since 2004.”

“I wrestled every weekend, or pretty much every other weekend, for the last 13 years now.”

Because of his earlier injuries, Cain had previously suffered from a drug addiction, and was hooked on GHB and painkillers for seven years. He entered rehab in 2000 and moved on from those problems.

After defeating his demons and spending over a decade back making the rounds on the indy circuit, something went wrong. 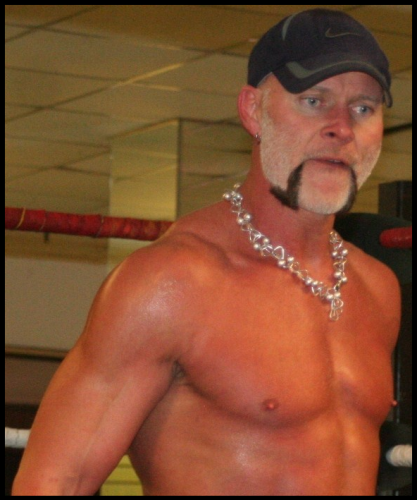 “About two months ago, I noticed drastically- in one day-  numbness and weakness in my left hand.” he said. “After having two neck surgeries and a fusion before, and the way it happened so quickly, I knew that something was wrong.”

“Within a week, I had started losing so much feeling in my arm, they had to do a rush job on surgery. They had to get me in as quick as possible for a fusion.”

And while a return to the ring as Lodi may now be in jeopardy, there looks to be a future for Brad Cain in his second life— as a Christian speaker.

“I average about 20 or more speaking engagements with youth groups and churches,” he said. “That’s my true passion now. “

It may seem strange to fans who watched the bizarre, ‘out-there’ character to know the man behind the image grew up in the southern church and was groomed on the gospel.

“As much as I love wrestling, for most of my entire career, I had gotten so far away from the way I was raised,” he explained. “I was not doing the things I should have been doing outside the ring.”

That testimonial is something he carries with him today, even into the sometimes unbalanced world of pro wrestling.

“In 2011, my tag team partner, Scotty Matthews, and I got together. Our name is Team Fearless, because we are fearless to stand on any street corner, or in any locker room, and talk about our love for God. I’m much happier now, that I’m living for HIM, and not just for myself.”

He says he still does some of the things that made him famous as Lodi, however.

“When I was in WCW, I was always a bad guy,” he said. “So, I would carry signs that said stuff like ‘THIS TOWN STINKS’, or ‘I HATE YOU PEOPLE’ or something crazy like that.” 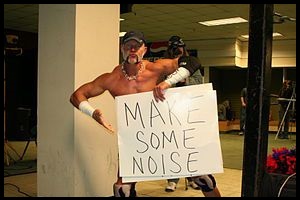 Lodi said things are a just a little different these days.

“Now, I go to the ring with bible verses on my signs. It’s a drastic change from the old character, and I couldn’t be happier about that; My wrestling has a reason now.”

Cain continues striving to get back on the road- in front of more crowds. He’s also facing the mounting medical costs that come from multiple surgical procedures. Still, he maintains his faith on the long journey back.

“For now, until I start therapy, we don’t know how much of that feeling is going to come back. I’ve always held myself to a pretty high standard as far as staying in shape. This just kind of came out of the blue.”

“There was no warning, no bad bumps, or anything like that. I actually felt great. It was one of those things, over the years, the wear and tear just got to my neck, I guess.”

He says he was dead lifting 475 lbs. before the surgery. A week later, the life-long fitness fanatic couldn’t hold a small dumbbell in his left hand.

“I heal really fast, and I know I have a healer in God, who has done a good job healing me. I’m up and I’m mobile, but my left arm still doesn’t work, and I’m in a neck brace 24 hours a day.,” Cain, who turns 47 this week, said. (He ironically shares a birthday with his former running buddy, Raven)

For now, Cain can only work in a management role at Your Flex Appeal, but says what he really can’t wait for, is to get back out and spreading the message of God.

“I was probably winding down as an indy wrestler over the next year or two anyhow, so I’m kind of dealing with that from a mental aspect,” he said. “But, there’s nothing more important to me than spreading the gospel. Over the past year,  I’ve been working so hard to start transitioning to more of a speaking role, and using my mouth to spread the word of God.”

That, he says, is his ultimate mission in life. That’s where he finds his salvation.

“I know God is always refining me and teaching me something,” Cain said. “I know my identity is not in how much weight I can lift, or how my body looks or how I wrestle. So, I know this is probably his way of slowing me down and pushing me towards what he wants me to do next.”

“I know I can get through this. It’s just another thing to add to my story…. And, it’s a really interesting story.”