The following is a short editorial on the nWo and Hulk Hogan. All views and opinions are, as always, my own. 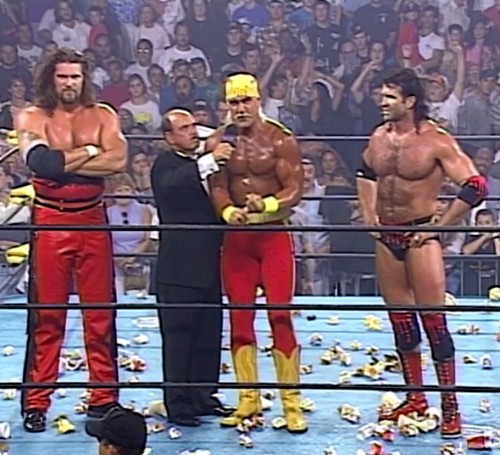 The arena was absolutely exploding, as Hogan entered the ring, ripped his shirt off and stared down the Outsiders. Then…the unthinkable. Hogan legdropped Randy Savage, betraying all of us. Hogan turned on WCW, and the announcers had the best reactions

“Lets get everyone out of the locker room and kick his rear end!”
“You just sold your soul to the devil”
“Imagine all the little Hulksters with the tears running down their faces right now?”

Mean Gene took his life in his own hands, going into the ring as everyone was throwing garbage in the ring. We were betrayed. Hulk Hogan, the biggest babyface in the industry, had gone heel. No one ever saw it coming, including a lot of the WCW staff. It’s hard to say now, but it’s believed that only a few people knew about his heel turn.

Hogan was the greatest face of all time. He started as a heel, but he was too much of a “nice guy” to continue to be a heel, Eric Bischoff took a failing Hulk Hogan aside, and talked to him about turning heel.

At this time, it was the mid 90s, and the Hulkster just wasn’t gaining traction in the WCW as Turner had hoped. In fact, he was slipping down slowly. The American Icon just wasn’t on his game anymore, and the days of Hulkimania were failing. I personally believe the steroids trial was the beginning of Hogans downward spiral. Eat your vitamins say your prayers while I take steroids. It shattered his image, and only one thing could save him now: A total revitalization of his career.

But what could they do? You can’t take an icon like Hogan, pull him for 3 months and repackage him. He’s way too well known. So you do the one thing he has never done…
You turn him heel. 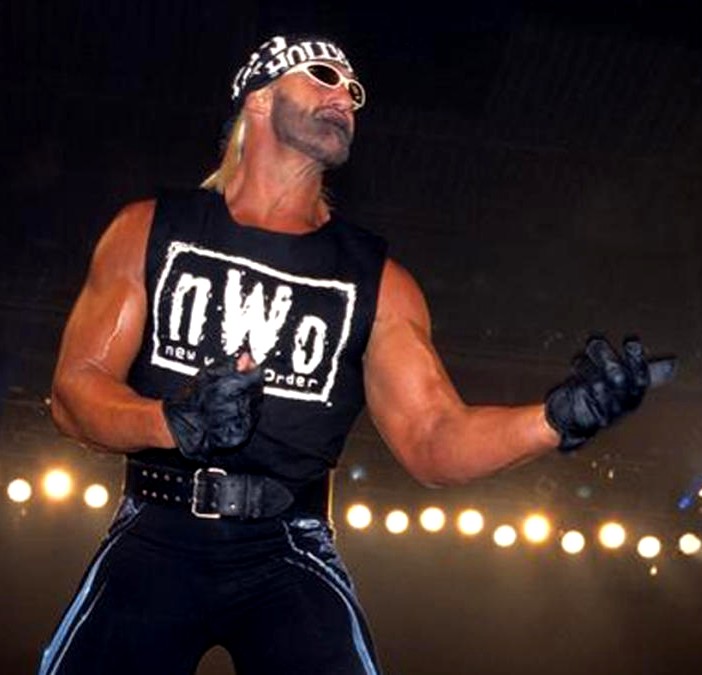 After multiple attempts, Bischoff finally made Hogan realize to stay relevant, he had to reinvent himself, and that’s exactly what happened at Bash at the Beach 1996. Hogan reinvented himself, and formed the “New World Order of wrestling, brotha!” Or was it “New World Organization”? Either way, the nWo was formed that day, as well as the original Wolfpack with Hall, Nash, and Hogan.

The problem here was the nWo got too big for their britches, and fast. With Hogan as the main attraction, everyone got in line to join the nWo. Talented wrestlers like Eddie Guerrero, Chris Jericho, Booker T, among others, were buried midcard due to Hogan’s nWo taking over the entire WCW. Quite literally, at it’s peak the nWo consisted of 62 members, spreading over WCW, WWF/E, and even in NJPW, using a modified theme called Rockhouse, the entire song just seemed slowed down. One you-tuber, James Stone, hilariously said that “It sounds like the WCW version of the theme was remixed by Ron Jeremy.”

If there’s interest, I’ll look into this strange incarnation more, called nWo Gundam and/or nWo Typhoon. This group was a heel under the lead of Chono, and a face under the leadership of Mutoh.

But, back to the US nWo; I won’t go into much detail, but the Hogan-led faction reigned from July 7, 1996, until April 27, 1998. Things got strange for the Hulkster then, as the nWo split into the Hollywood and Wolfpack factions, who were supposed to be faces. This feud lasted from April 27, 1998, until January 4, 1999, when we had the famous Fingerpoke of Doom, which lets be honest, was bullshit. The new nWo was called nWo Elite, while the Black and White were the “B Carders”. By this point, Hogan and the Outsiders had pretty much left, and gone back to WWF/E and brought the nWo there, because, as Vince would say, “This is some good shit!”

Throughout his entire nWo tenure stretching from 1996 to mid 1999, Hogan continued the “Hollywood” gimmick, even bringing it to WWE for a short time – where Hogan led the nWo in it’s first of six incarnations there.

But, the WWE nWo never really got traction, but Vince sure tried his hardest, from the moment they debuted at No Way Out in 2002, even after Hogan left after WM X8. The group continued to change leaders over and over through six incarnations, until finally Micheals kicked Booker T out, Nash suffered a bad quad tear, and finally – Vince disbanded them on July 15th, 2002, after beating a dead horse all year long.

Hulk Hogan ran as a face for awhile, then sort of vanished again. His career in my opinion peaked when the original nWo formed, and continued from there as the nWo were running sky high (nWo Souled Out, anyone remember? “Oh they forgot the WCW guys music!”). I think the nWo started fail after the first Souled Out, when, even being an nWo show, the WCW guys won a lot of matches. It was pretty shameful. The nWo just never was the same after that. The angle was fantastic for awhile, then it just got stupid.

The nWo started to fizzle, despite more and more joining, and the whole “Here comes the nWo!” during EVERY match got old. In my opinion, that was the end of the nWo right there, and from then on, they continued to pull a Vince and beat a dead horse over and over.

Oh wait, Russo was working there, that explains it all!

Before we go, here’s a list of celebrity members of the nWo from Wikipedia, the most reliable source on the internet!