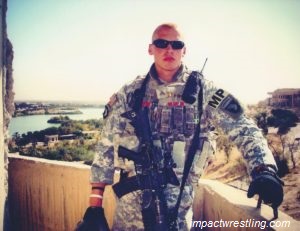 NASHVILLE – To celebrate Memorial Day, IMPACT WRESTLING shared the personal military story of Anthony Mayweather, known simply as Mayweather to his loyal legion of fans, as he is half of the Veterans Of War (VOW) tag-team.
Mayweather served 5 years in the U.S. Army, with the 101st Airborne Division, from 2004-2009, serving two combat tours in Iraq.  He received a Combat Action Badge for the combat situations himself and the team he was with, and he also received two Army Commendation Medals for his service.
“Memorial Day is more than just a long weekend or an excuse to have a cook out,” Mayweather said.  “Memorial Day is a day to remember the military service members who made the ultimate sacrifice for their country and lost their lives in combat.  I generally like to spend Memorial Day weekend with my family in peace, remembering those friends of mine who didn’t make it home from war.”
Mayweather offered his views on the National Anthem, the U.S. Flag, and he picked his Most Patriotic Sports Moment from a list of three amazing, memorable moments.
For the full story about Mayweather, go to:
http://impactwrestling.com/memorial-day-interview-mayweather/