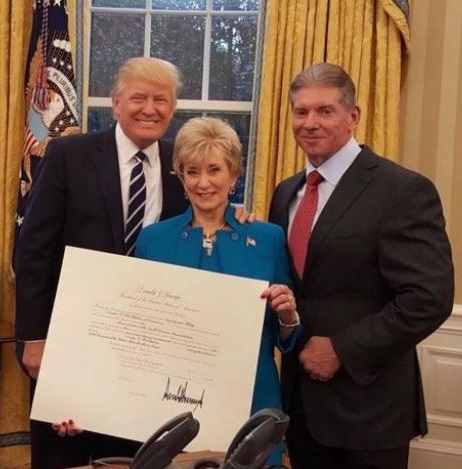 On Tuesday, the New York State Attorney General’s Office announced that they had reached a settlement in their suit against the Donald J. Trump Foundation over its (prolific) self-dealing and other assorted misdeeds. Beyond the usual Trump-scented malfeasance in which the foundation engaged, one detail especially jumps out: the foundation’s biggest donors were WWE founder Vince McMahon and his wife Linda, the latter of which is now a member of Trump’s cabinet.

The actual story of how the McMahon’s money wound up in Trump’s Foundation is quite a bit more complicated than that, though, most notably because the Foundation’s official filings say that it was in fact WWE, the McMahons’ publicly-traded company, made the donations. This goes against multiple contradictory denials that the company has made over the years regarding its responsibility.

The connection between the Trump Foundation and the McMahons was first reported by The Smoking Gun in April 2011, as the site did an investigation into the foundation and determined that Trump was “the least charitable billionaire.” The article, which has no byline and includes images from the Foundation’s 990 forms in question, states outright that the donations were made “in return for the developer’s assistance in working a couple of televised angles along with WWE boss Vince McMahon.” That’s a logical enough conclusion given that the donations are listed in the filings as coming directly from WWE and that their timing coincides with Trump’s storyline involvement with the company—in 2007, which was when Trump and Vince put their hair on the line at WrestleMania 23, and then 2009, when Trump “bought” Monday Night Raw from Vince only to sell it back at a profit the following week … Read The Full Story HERE