Born on May 19, 1946 in Grenoble, France, Andre Rene Roussimoff experienced symptoms of gigantism as a child. By the age of 12, He stood 6’3, and weighed over 240 pounds. Because of his incedible size and strength, he was outstanding at farm labor: According to his brother, Jacques, he could perform the work of three men.

When he turned 17, Andre moved to Paris and was trained in professional wrestling. He was originally billed as Geant Ferre, a name based on the French folk hero Grand Ferré. He performed as a wrestler while also working as a mover to pay living expenses. Eventually, Canadian promoter and wrestler Frank Valois met Roussimoff in 1966, becoming his business manager and adviser. 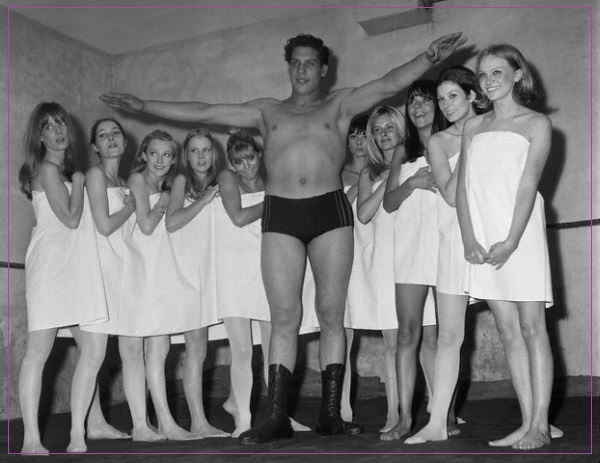 Andre debuted for the WWWF

in 1973 and quickly became the sport’s biggest attraction. His very real persona of a gentle giant made him popular with the fans, especially children. The big man began to make the rounds in New York, as not only a hero at Madison Square Garden

, but also a mainstream celebrity. As his star continued to rise, Andre also had a boxer-versus-wrestler win over Chuck Wepner (the inspiration of the Rocky film series) in 1976.

Because no fan actually believed that the massive Andre could be legitimately beaten by one man, he often competed in battle royals, or would face multiple opponents in handicap matches. Also, because of his unstoppable aura, he couldn’t stay in one territory for extended periods of time. Certainly, any champion’s title would surely not be safe with The Giant lurking for long.

, devised a touring strategy for Andre, essentially ‘loaning’ his largest attraction to various regional and international promotions. During the 70’s Andre was a favorite tag team partner of regional babyfaces, when they were outnumbered by the heels. When he finally appeared, he was always the top box office attraction in whatever city he was in.

When his time in that area was eventually over, he would move on to the next town. This similar talent exchange continued throughout the decade. At every stop, Andre’s appearances would assure that the gates would be large, and the crowds would go home happy. 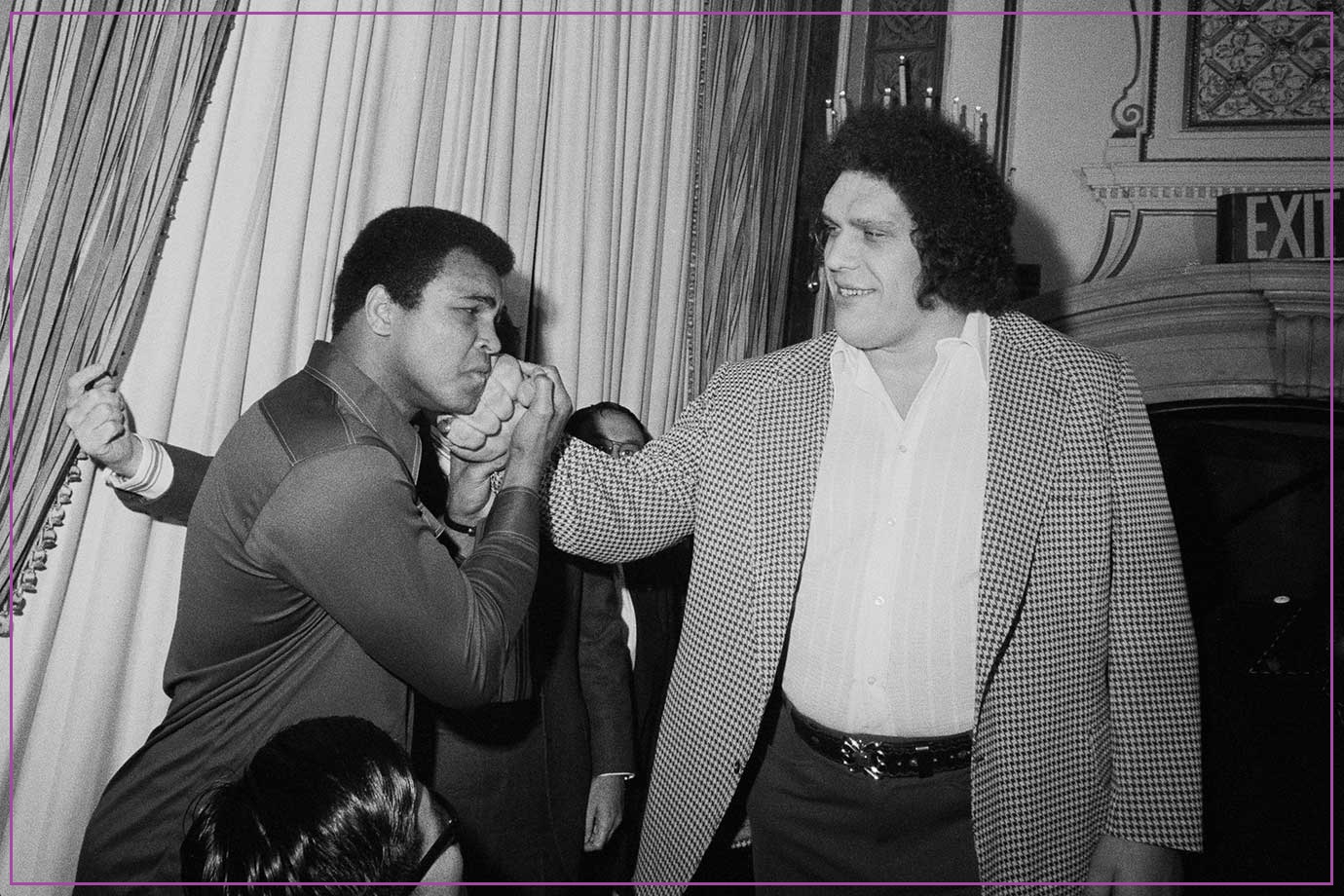 He was a natural curiosity. Athletes and celebrities would often want to be close to Andre, holding their hands next to his, or measuring their height up against his amazing stature. Because of this, and his personable nature, he also began to make appearances on several talk shows and at special events.

Andre was a favorite of Hollywood producers, because of his unique look and natural acting skills that were honed from years of impromptu performances in the ring. He made his American acting debut playing Bigfoot, in a two-part episode aired in 1976 on the television series The Six Million Dollar Man. He also appeared in other television shows, including The Greatest American Hero, B. J. and the Bear, The Fall Guy and 1990’s Zorro.

André had an uncredited appearance in the 1984 film Conan the Destroyer. That same year, André also acted in Micki & Maude. His most famous Hollywood role would be as Fezzik, in the 1987 film The Princess Bride. Both the film and André’s performance have garnered a cult following in the three decades since the film’s release.

, which culminated in a $15,000 Bodyslam match at the inaugural Wrestlemania

, he won a 20-man battle royal featuring WWF wrestlers and top stars from the NFL. 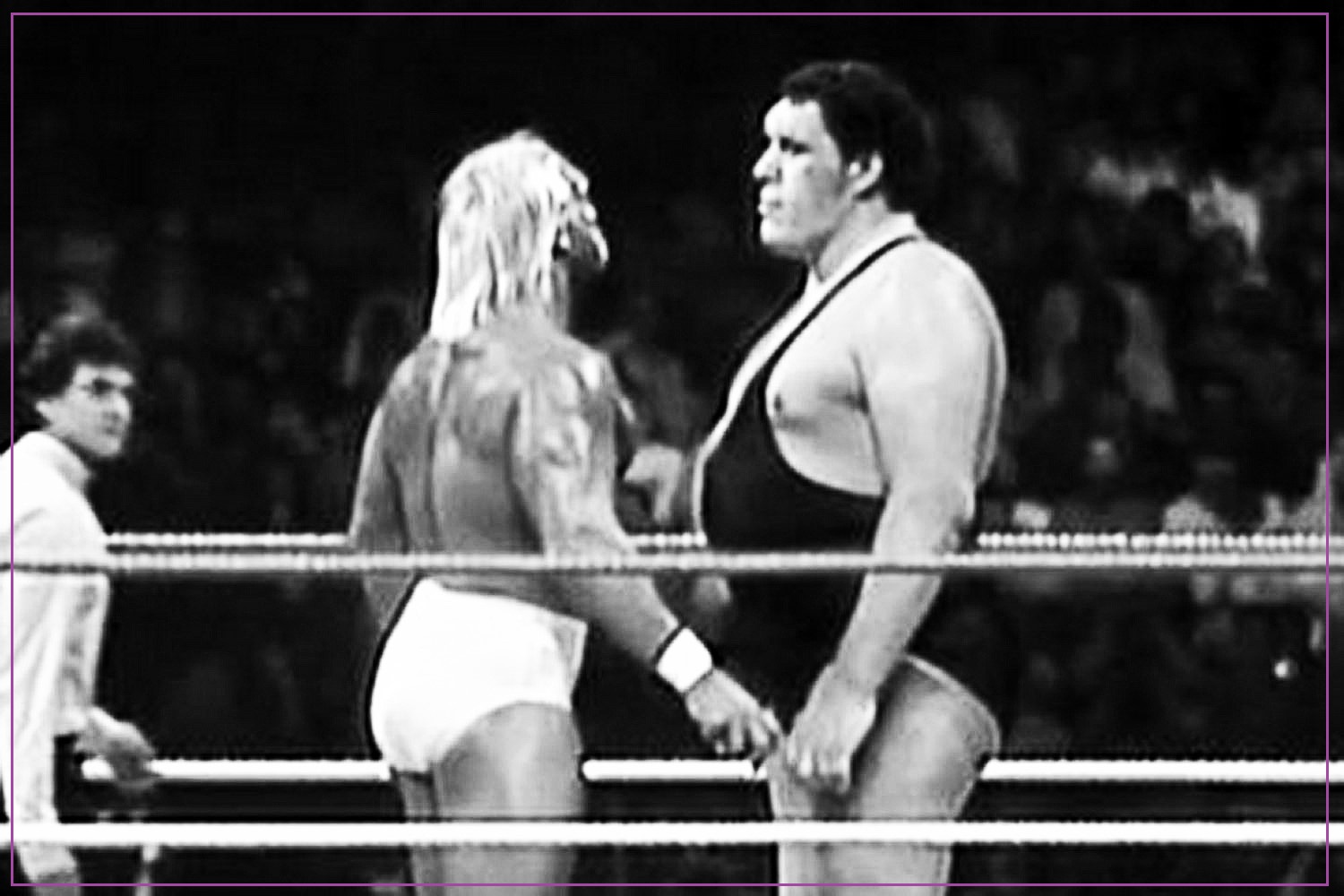 Andre the Giant would finally become a heel for the biggest feud of his career, when he turned on his longtime friend and partner, Hulk Hogan. In a Piper’s Pit segment that aired February 7, 1987, Jesse Ventura and Bobby Heenan brought the big man out on the set, just after Roddy Piper had initially introduced the Hulkster. Heenan said that Hogan had nothing but jealousy for Andre. The Brain told Hogan that he was only Andre’s friend, because he was scared to face the Giant for the belt.

Then, Andre challenged The Hulkster to a WWF Championship

match, and proceeded to violently rip off his famed Hulkamania T-shirt and crucifix, tearing the skin on his chest and causing him to bleed. The image of Hogan, holding the cross after the betrayal, became an image that is now frozen in time for fans of the era.

, Andre would have his last turn as the top star in the business, as his health was in serious decline at that point. Weighing 520 pounds, he wore a back brace covered by his wrestling singlet. For The Giant, it was a torch-passing moment, as his era was ending, while Hogan’s was in fully in bloom.

In a flashbulb-popping moment, their epic match hit its climax when The Hulkster

slammed the challenger, dropped the leg, and retained the title in front of a record-breaking crowd at The Pontiac 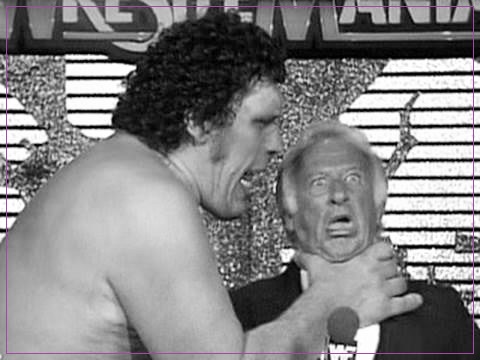 (Note: Despite how the match was billed by the WWF

in 1987, it would not be the first time Andre the Giant had been bodyslammed.  Andre had already been slammed by a then-heel Hogan twice in the summer of 1980. Harley Race

, El Canek, and Stan Hansen -and possibly others- all also slammed the Giant at one point.)

On the first episode of The Main Event

in February 1988, Andre finally defeated Hogan with the help of some shady refereeing to win his first and only WWF Championship.

The episode drew whopping ratings in prime time, and still remains the highest rated wrestling program ever. Having completed his job of acquiring the gold, he turned and gave the belt to The Million Dollar Man, Ted DiBiase

. That title change was invalidated by WWF President Jack Tunney, and the championship made vacant until a tournament to fill the void was held at Wrestlemania IV

At ‘Mania, Hogan and Andre eliminated each other with a double disqualification, and Randy Savage

went on to defeat DiBiase to win the WWF Championship. 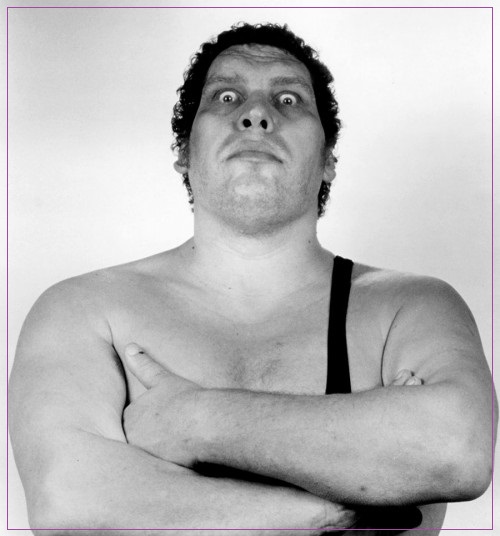 Later, Andre would go on to team with Haku, as the Colossal Connection, to win the WWF Tag Team Championship

. The two would hold the titles until Wrestlemania VI in April 1990. After the match, Heenan berated Andre, but Andre responded with a huge slap in the face, finally returning to his bayface roots.

With his health declining, Andre’s final WWF televised appearance was at Summerslam

in an interview segment in September 1992 at Clash of the Champions XX.

Andre the Giant would pass away in his sleep in his hotel room in Paris. His remains were cremated, and his ashes were spread at his ranch in Ellerbe, North Carolina. He was 46 years old.

HBO will release ANDRE THE GIANT, a full-length documentary on the life and legacy of the professional wrestling legend on April 10, 2018. Watch the full-length trailer HERE