Born October 8, 1966 in Portland, Oregon, Barr was a second-generation wrestler; his father Sandy had wrestled, as had older brother Jesse. He would soon to became an accomplished amateur wrestler, winning four district and two state championships. He attended Oregon State University, briefly, but dropped out when his first wife became pregnant.

After being trained by his father, brother, and Matt Borne (who would later become the original Doink the Clown in the WWF), Barr debuted for Pacific Northwest Wrestling in April 1987.  A year later, Barr’s friend and mentor, Roddy Piper, suggested that Barr began wrestling as ‘Beetlejuice’, named after the title character of the movie of the same era. Wearing face paint and flour in his hair, Barr became a crowd favorite in the area.

On July 16, 1989, Barr had a sexual encounter with a 19-year-old girl after a PNW card in Pendelton, Oregon.  The female involved would subsequently file rape charges. Barr continued to wrestle as Beetlejuice, despite the charges and local pressure from the media due to the allegations. A year later, Barr was polygraphed as part of the police investigation, during which he admitted the girl did not consent. Barr worked a plea-bargain, and was convicted of first-degree sexual abuse. He was fined $1,000, placed on two years probation, and sentenced to 180 hours of community service, but served no jail time.

Barr’s license to wrestle in Oregon was not renewed, due to the conviction, but WCW President Jim Herd decided to hire Barr, thinking a Beetlejuice-type character would attract a younger demographic. Barr joined World Championship Wrestling in 1990 and was renamed “The Juicer” in order to avoid copyright conflicts. Much of the fallout from Portland followed him to WCW, and despite gaining a modest fan following, he was released from the company.

After leaving WCW, Barr was brought into Mexico’s Empresa Mexicana de la Lucha Libre promotion by the company’s superstar, Konnan. In Mexico, Barr found the greatest success of his career.

He initially wrestled under a mask as “The American Love Machine”, before losing it about a year later to Blue Panther, in a mask versus mask match. 18,000 fans sold out the 17,000 seat Arena México in Mexico City and another 8,000 fans watched on big screen TV in the parking lot to see the card. The match ended when American Love Machine performed a piledriver on Blue Panther, an illegal move in Mexican wrestling that would cost him the match, thus losing his mask. 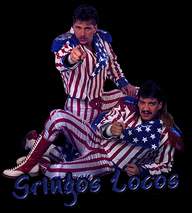 Barr left EMLL to follow Konnan to his newly formed Asistencia Asesoría y Administración promotion. As “The Love Machine” Art Barr, he debuted in AAA as a heel, and formed the tag team “La Pareja del Terror” (The Pair of Terror) with Eddie Guerrero.

The team of Guerrero and Barr was highly successful, as they would go on to become arguably the most hated tag team in lucha libre history. Barr and Guerrero formed a faction after being joined by Konnan, Black Cat, Madonna’s Boyfriend, Jake Roberts, Misterioso, Chicano Power and King Lion. Together, the faction became known as Los Gringos Locos (The Crazy Americans).

Despite his success and stardom in Mexico, Barr was reportedly homesick, missed his wife and child in Oregon, and eventually turned to a regular ritual of alcohol and drug use to deal with life on the road. Despite his personal struggles, Barr was reportedly well-liked by his peers, and considered a rising star in the industry.

After his passing, his tag team partner and friend, Eddie Guerrero continued to perform the frog splash throughout his career, in tribute to the late “Love Machine.” At Triplemania XXIV, Barr was posthumously inducted into the AAA Hall of Fame as the 2016 inductee.