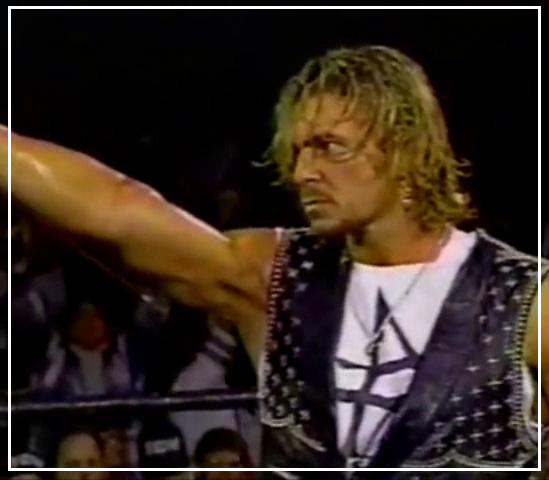 Brian Pillman entered professional wrestling after playing college football as a defensive tackle for the Miami of Ohio, where he set the school record for tackles for loss. A second-team All-American on two occasions, he went undrafted by the NFL and signed with the Cincinnati Bengals as a free agent He would also sign briefly with the Buffalo Bills before wrapping up his playing career with the Canadian Football League’s Calgary Stampeders in 1986.

Pillman began his wrestling career for Stu Hart’s Stampede Wrestlng in Calgary and form the duo of Bad Company with Bruce Hart. The pair would win the company’s tag team titles twice, before Pillman signed with WCW.

As Flyin’ Brian, he wrestled a  lucha libre-style offense that was faster paced than many of his WCW contemporaries. Pillman would win the US Tag Team Championship with Tom Zenk in 1990 and the WCW Light Heavyweight Championship in 1991 and 1992.

After turning heel, he would win the NWA and WCW tag team titles with  “Stunning” Steve Austin, as one half of the Hollywood Blonds. After losing the titles, the duo would split later in the year.

Pillman and Arn Anderson then teamed up and feuded with Ric Flair during the summer and fall of 1995. After pulling a fast one on Sting, Flair would then join with Pillman and Anderson along with newcomer Chris Benoit, would form a new version of the Four Horsemen.

Around this time, he would begin to develop his “Loose Cannon” gimmick. This led to a showdown in February 1996, where Pillman and Kevin Sullivan fought in a strap match. Per the conditions, the loser would acknowledge defeat by saying they respected their opponent.

The match went less than a minute before Pillman said “I respect you, booker man”, outing Sullivan as a booker for WCW. Eric Bischoff fired Pillman following the event, but believed he would return to the company after with the new gimmick. It didn’t quite work out that way, as Pillman left for ECW, and eventually signed with the WWF.

He would take part in one of wrestling ‘s most infamous angles, “Pillman’s Got A Gun” on the November 4, 1996 episode of RAW. Brian’s old tag team partner Steve Austin looked to take out Pillman at his home, but Pillman responded by pointing a 9mm handgun at the intruding Austin. The company and Pillman both had to issue an apology due to the incident.

Pillman would be a part of the last incarnation of the Hart Foundation in 1997. Scheduled to wrestle Dude Love at Badd Blood: In Your House, Pillman was found dead in Bloomington, Minnesota, in his hotel room.

Despite drugs being found on the scene, an autopsy revealed that it was a heart condition that contributed to his death— the same condition that lead to the death of his father. He was 35 years old.