The general feeling seems to be that wrestling is missing the emotion it once had. On Monday, May 11, Becky Lynch reminded us it’s still there.

Monday Night Raw from May 11, 2020 may have started with the best moment of wrestling television of the year.

The table has to be set before getting into why. We’re all well aware of the Zombie Apocalypse Plague that hit in March and is showing no signs of slowing down. Because of this, the major wrestling companies started running shows in a confined area with no audience present.

This, by itself, has already led to a shift in how wrestling is seen. How could it not? A major factor in how people watch and enjoy pro wrestling has been taken out of the equation.

Without a large crowd gathered to react in unison to a performer, the dynamic radically changes. Those that have always wanted to see pro wrestling presented as more of a pure sport – in some aspects – have that opportunity now. But it comes with the loss of what arguably makes pro wrestling one of the most exciting art forms on the planet.

One show already had an uphill battle in so far as audience appreciation before the pandemic happened. Raw in and of itself is normally a slog to sit through in full. No, this is not going to become a small tirade about how awful the show is using insider speak to justify points or anything like that. Any show that’s three hours long each and every week is a slog to sit through. The general consensus has come to this same conclusion.

Right off the bat on Monday, the tone was already different. When Raw Women’s Champion Becky Lynch came to the ring with the Money In The Bank briefcase in her hand (which her next challenger had won, not her) and tears in her eyes, the alarm should have already gone off.

The scene was a bit odd when she relinquished the title she had scrapped for and maintained a stranglehold on for more than a year. Why would Lynch just hand over what she had fought so hard to earn and then keep.

Then we found out.

Becky’s tears were not for what may have been suspected. And while Asuka still celebrated, her tone immediately changed direction once Lynch made her news public. She was no longer celebrating winning a championship, she was celebrating her friend’s life milestone.

As many times as the announcers like to try and sell us on this kind of thing, this time the emotion really was palpable. 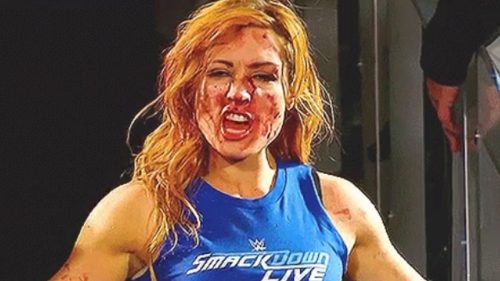 Reality had worked its way into pro wrestling once again, but this time in the best possible way. This was happy news for one of the roster’s most respected top-tier talents, and it was treated as such by all involved. Rather than try and act like they were happy, it was obvious that Lynch and those surrounding her actually were.

We can talk about the direction (or lack thereof) in the stories being told and the storytelling itself as well as other factors. We can talk about how some weekly shows are doing better than others and what format they’ve had to adapt to using. But the general feeling seems to be that wrestling is missing the emotion and excitement it once had. On Monday, May 11, it was there.

Pro wrestling is different things to different people. To some, it should be strictly presented as a pure sport with no room for shenanigans. For others, it is simply another form of entertainment and should be treated that way. For others still, it is an art form that can change, grow and evolve like other forms of art, performance or otherwise.

No matter the school of thought, we’ve seen time again one thing hold true about pro wrestling: the more real it seems, the more its audience will gravitate to it. Whether or not the scene, feud, match is staged or not, the more believable it is, the more memorable.

What we saw on Monday Night Raw was believable because it was real. Becky Lynch isn’t playing out a pregnancy storyline – she’s really going off to be a mother. Asuka wasn’t playing as if she were happy for her sister in combat – she really was. That kind of emotion can’t be faked.

And because we got to see it unfold live, it may go down as the best televised pro wrestling moment of 2020.

Michael Melchor is the Executive Editor of TheGorillaPosition.com.

He has been a writer and editor for various publications and websites for over 20 years including 411Mania.com, 1Wrestling.com and the Miami Herald covering music, comics and – of course – wrestling, all from a different perspective. He is also a media and television production specialist for Ohio Valley Wrestling.