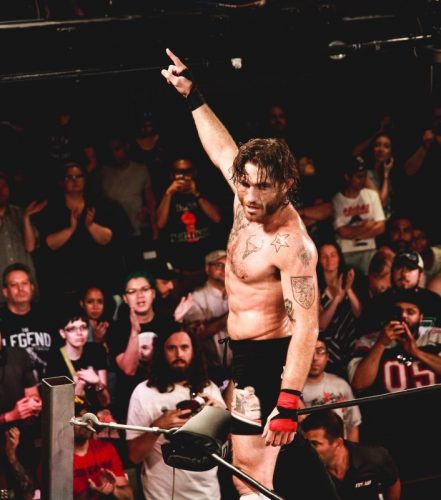 The National Openweight Championship Finals will come into focus as Brian Pillman Jr. wrestles Rich Swann with the winner advancing to the finals on June 1st at Fury Road live from Milwaukee.

Swann’s newfound aggression and experience could come into play in a major way. Flanked by Myron Reed, the advantage may go to Swann in this big bout with championship implications. However, don’t count out the “Cincinnati Kid” Brian Pillman’s scrappy tenaciousness. For the youngest member of the Hart Foundation it is his destiny to claim his first major championship in the sport. Can he get one step closer?

ALSO ON THIS EPISODE: Following the chaos sparked by Mance Warner and Sami Callihan on Salina de la Renta’s special edition of FUSION, the empresaria looks to take a pound of flesh in revenge. Promociones Dorado’s Hijo de LA Park and “El Sicario” Ricky Martinez take on Ol Mancer and Callihan in what should be a wild fight. One week out from a major World Heavyweight Championship bout, FUSION takes a look at Germany’s top ranked wrestler “Avalanche” Robert Dreissker.

“Filthy” Tom Lawlor will also check in from his fight camp in Las Vegas. The maestro of Mexican Strong Style, Daga, will test his technical talents as he grapples with GHC Junior Heavyweight Champion Minoru Tanaka. The Japanese shoot-boxer and submission guru will be tested on the mat and in the air as he squares off against a top-level luchador in Daga.

You won’t want to miss the Fury Road Control Center as the full card for the June 1st broadcast is revealed. That’s not all! CONTRA Unit has demanded a pre-taped video air. What will the global dealers in violence have to say? Tune in to find out. Last week the Big Apple Miracle occurred with Air Wolf defeating elite luchador Rey Fenix. Will there be a rematch?