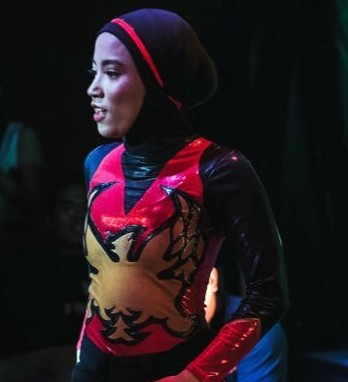 Nor “Phoenix” Diana was armed for war. For every pro wrestling match, including her tryout in 2015, she’d worn an orange and purple mask that’s embellished with dramatic waves of flame. Minutes before a match between her and her long-term training partner, Luna, at the start of the year, Diana realized she didn’t need to hide her face anymore.

“No disrespect to people wrestling in masks, but I was tired of hiding my face. It was time for one journey to end and the next one to begin,” she said.

The loser of the match had to remove her mask. Diana was prepared to peel it off.

The reveal left her gobsmacked. That was the first time Diana cried in the ring. She saw herself, not a character, as the wrestler. A year later, she’d cry again — this time in joy after lifting her first championship title belt in the air.

This was her way of addressing the naysayers, the people who whispered behind her back and to her face the day she decided to walk into Malaysia Pro Wrestling (MyPW) for training … Read More HERE

One thought on “ESPN: Nor ‘Phoenix’ Diana, the first hijab-wearing pro wrestler, is ready to face the world”