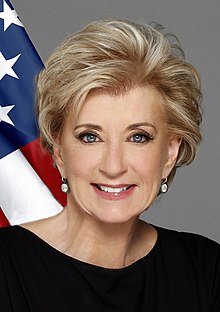 WASHINGTON — Linda E. McMahon, one of five women in President Trump’s cabinet and the former chief executive of World Wrestling Entertainment, stepped down on Friday as the head of the Small Business Administration, the White House announced.

One of Mr. Trump’s most prolific donors during the 2016 presidential campaign, Ms. McMahon joined the administration early in Mr. Trump’s term and avoided the kinds of scandals and high-profile attention that many of her cabinet colleagues endured during the last two years.

With Ms. McMahon by his side at his Mar-a-Lago estate, Mr. Trump praised her as a “superstar” who had done much to improve the operation of the Small Business Administration… Read the Full Story HERE