The Alicia Atout Express continues to roll on, and it’s headed for Chi-Town.

The 24 year old wrestling broadcaster, ring announcer and host of AMBY (A Music Blog, Yea?) is seemingly always on the road or on camera. And, none of that will change later this month, when her seemingly, non-stop journey will lead her to Starrcast III.

The bustling event will take place from Aug 29-Sept 1 in Chicago, and will coincide with AEW’s ALL OUT pay-per-view in nearby Hoffman Estates. A veritable who’s-who of pro wrestling royalty will fill the lineup for Conrad Thompson‘s mega-convention, and Atout says she can’t wait to be a part of it.

“I’m obviously thrilled to be a part of Starrcast,” Atout told TheGorillaPosition.com in a recent interview. “It makes you feel like you’re doing something right, and it’s a real privilege, when you’re asked to take part in something special like this. And, it’s exciting, being surrounded by so many legendary people.”

Despite her youth, Atout has already racked up years of experience on her path to this huge event, launching her journalism career right out of high school. She started out writing articles and doing short interviews with local bands, but eventually morphed AMBY in to a pop culture hit. As she began interviewing bigger and bigger acts, the blog grew in stature and garnered thousands of followers in the process.

Atout credits her family’s steady support as a reason for her quick success.

“It meant everything to me,” she recalled. “There was a point where every single person my age was going to college or university, and I thought I might be making a horrible decision by chasing this big, ‘off-the-beaten-path’ dream of mine.”

“It was a big gamble, and the fact that my parents believed in me enough… that meant everything to me. They still come to shows with me, they still support me, and watch stuff on TV when I’m on.”

“They’re awesome, because if they hadn’t pushed me to do the things I’ve done and get me out of my comfort zone, there’s no way I’d be where I am.” 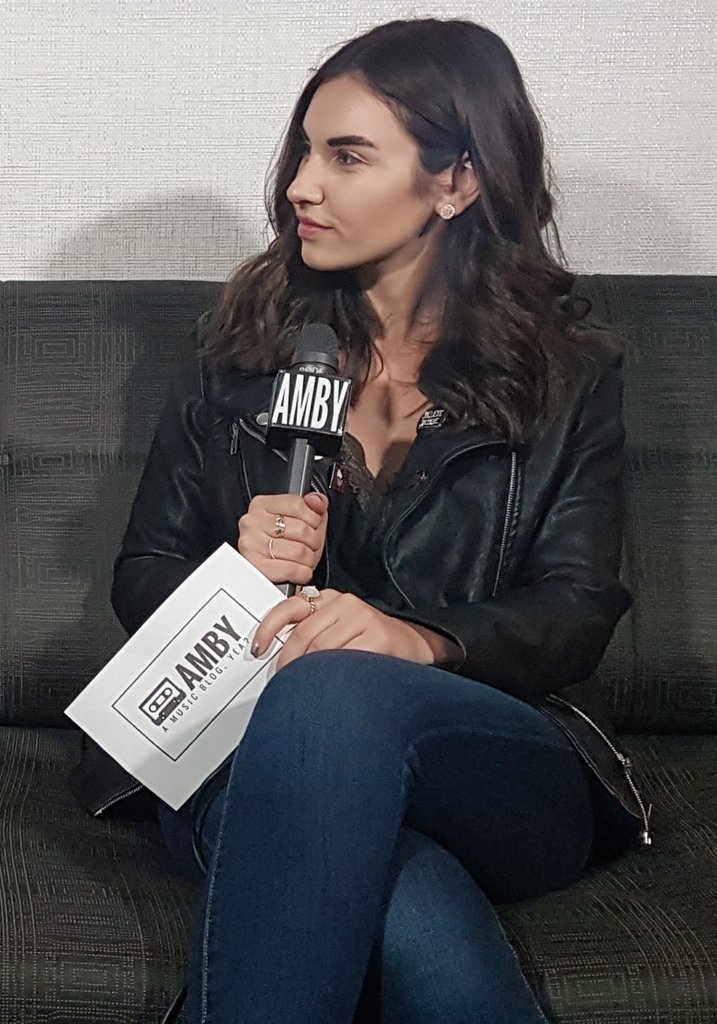 Along the way, she transitioned from music to the mat. Atout made her first big splash on the scene over a year ago, becoming the backstage host for Impact Wrestling. During her time there, she not only appeared as an interviewer, but also showed some versatility by hosting the promotion’s Behind The Lights web series on Twitch.

That established success would lead to her most high-profile appearance ever, at All Elite Wrestling’s Double or Nothing pay-per-view in May. Since then, Atout has made numerous appearances at independent events and conducted seminars.

“Every weekend, I’m traveling to shows all around North America,” she said. “Sometimes even further than that… which has been extremely cool. It’s a lot, whether its an appearance where I’m signing and meeting fans, or it’s a gig where I’m hosting an event for a wrestling legend that I grew up watching. Or, simply just opening a show, ring announcing, or doing a backstage segment, it’s exciting for me. And, it’s exciting to see how this whole thing has grown.”

Atout says she wants to continue to build her resume as a broadcaster, but doesn’t see a career inside the squared-circle anytime in her future.

“I did some color commentary out of the blue, one time, out of the nowhere,” she laughed. “And I thought, if you never try, you never learn. It feels very vulnerable, because it’s easy to mess up. But, it was all pretty smooth sailing, actually.”

“Since then, I’ve had some other companies asked me to do some things. So, I’m definitely interested in doing more commentary and learning that.”

“But as far as in-ring stuff? No way. I would do some kind of angle where I would get involved and maybe take a bump. And, I got to slap somebody the other night, which was pretty fun. But, as far as being an active wrestler? I don’t think so.”

Atout continues to stay busy with her multiple appearances, and waits to find out what her role might be when AEW launches in October.

“I believe AEW are still figuring out the last pieces of the puzzle. And the broadcast team are pieces of that puzzle,” she said. “So, I have been conversing with them, and I know the fans definitely want me to be a part of it.”

Atout says that she’s excited for all the changes that are taking place on the wrestling landscape, and thinks the youth culture has brought on much of that transformation – through social media, and an attitude to try different things to achieve success.

“I think the biggest change I have seen so far, is watching people in the industry really take things in to their own hands and providing something that’s very cool,” she said. “It feels like people are taking a stand and believing in themselves at a much younger age now. And, they’re not afraid to stand up and say to everyone else, Hey! believe in me.”

Atout not only believes in wrestling, she sees a bright future ahead. For herself, for the launch of AEW, and for the industry, itself.

“Right now, there are a lot of people out there who are willing to invest in, and take a chance on younger talent. That’s special to see, and to have a chance to be a part of it right now is amazing.”

“My goal is to continue on with what I’m doing, and hopefully become a household name in the wrestling business,” she said. “I hope that doesn’t sound too big-headed, but I hope I’m one of those names that when people think about wrestling and people that are pretty cool who are in it? I want them to think of Alicia Atout.”

“I’d love to reach that stage where my work, and the time I have put in to my profession gets me to that point. That’s my ultimate goal.” 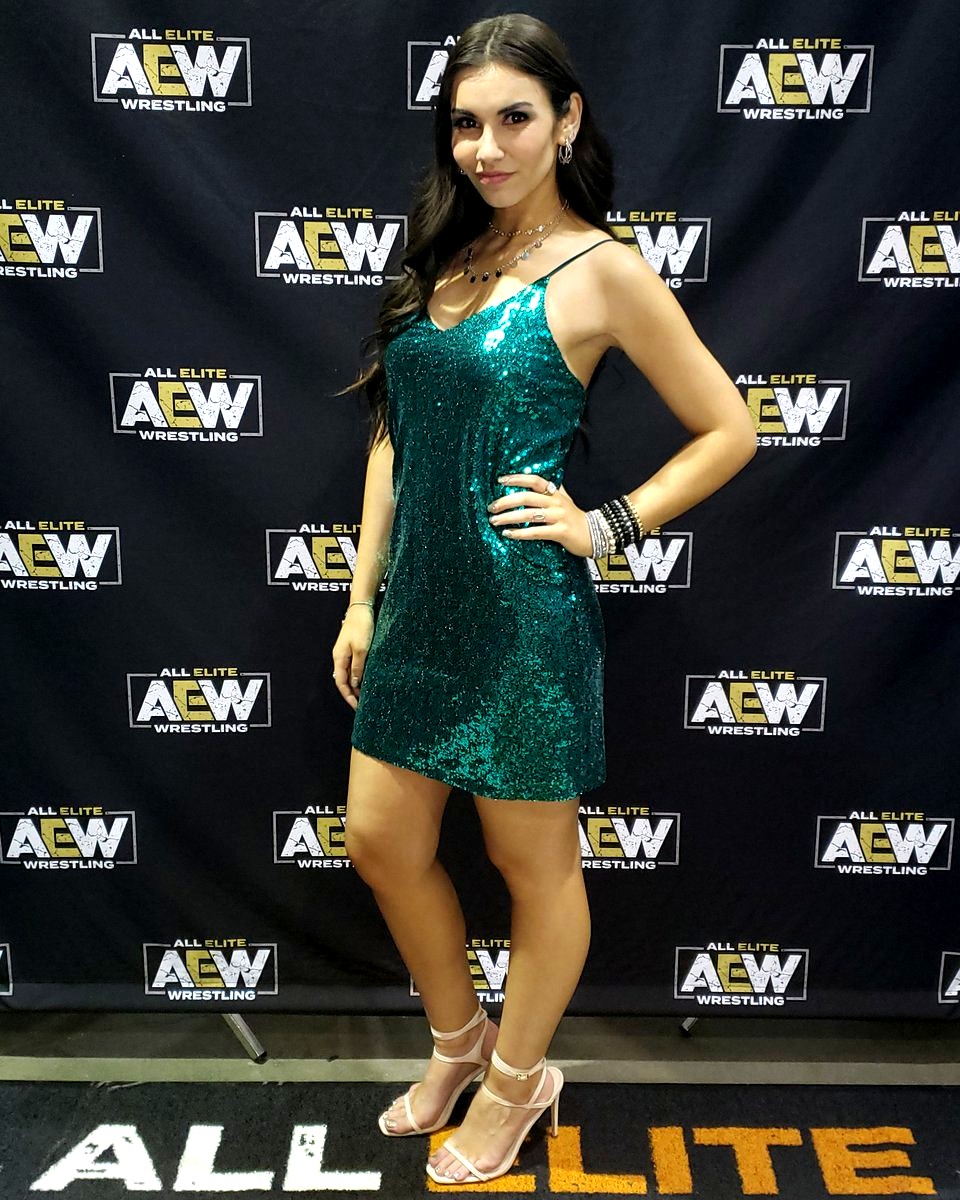